On July 9, 1972 Paul McCartney and Wings began a 26 date European tour with a concert in Chateauvallon, France. They drove across the continent in a psychedelic double decker bus McCartney helped paint.

They played no Beatles songs (unless you count the Little Richard cover "Long Tall Sally" and "Matchbox", a Carl Perkins tune) but fans heard "Bop Bop", "Mumbo", "Smile Away", "Give Ireland Back To The Irish" and future singles "Hi Hi Hi" (which would be released in December) and "My Love" (a #1 hit released in March of 1973).

The band tuned up for the tour with a series of unannounced concerts at UK colleges. For the European tourbook McCartney said in an interview:

We made it a policy to do new stuff rather than mums-and-dads-things. We figured the students were hip enough and if they didn't like it, sod 'em. Even new songs like "My Love" went down a bomb. In one place I caught a couple necking in the front row on that one, so we must have been giving off good vibes. I'll sing for that! It should be easier next time we go out live. What was new stuff will be recorded and known. 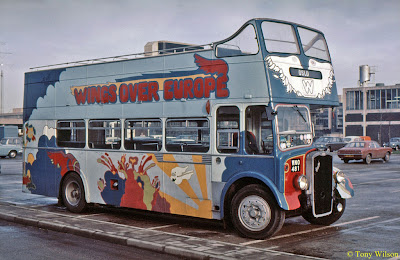 The only setback for Wings occurred August 10 in Gothenburg Sweden when Paul and Linda were both arrested for possession of marijuana. They were fined $1200.  All of which makes Paul's tourbook joke about his weight ("2 Stoned") a bit more ironic.

Something else from the European tourbook. Click to enlarge. 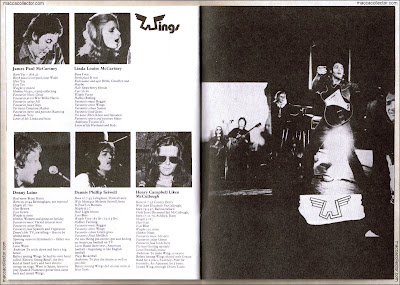