This Man Wants To Kill Your Music Blog 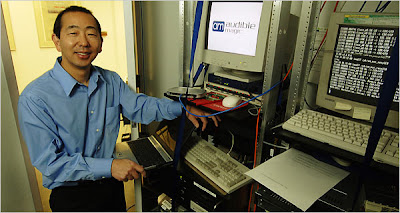 “This could put the genie back in the bottle.”
-Vance Ikezoye, CEO Audible Magic


Vance Ikezoye is a very smart man and he's well on his way to being a very rich man -- at the expense of people who illegally put entire movies, television shows and albums online for free download as well as those of us who briefly share single songs with the hope of giving recognition to new and old recordings that would otherwise never see the light of day.

There's no grey area. There's no "fair use" clause. No more excuses.

We're all pirates now. And we're about to walk the plank.

The CEO of Audible Magic has come up with a new weapon, content-recognition software, which makes it possible to identify copyrighted material by both its audio and visual fingerprint.

This week Audible Magic teamed up with MediaFire to prevent unauthorized sharing of video and music clips.

In a press release released Tuesday July 17th, MediaFire co-founder Tom Langridge said in a statement that reads like it's been vetted by a dozen attorneys.

"We have a commitment to providing secure, simple, cloud storage, backup, and collaboration services to our customers. Employing Audible Magic's best-of-class content identification technology allows us to continue to innovate while ensuring that we are going above and beyond the requirements of the law in order to better assist copyright holders in enforcing their copyright."

Winter is coming for those who write mp3 music blogs and post songs without permission. MediaFire is most likely just the first major file sharing company to join hands with Ikezoye.

Actually there's been a great deal of pressure on YouTube to use some kind of filtering system to eliminate copyrighted material as well. That could mean deleting not just clips of TV shows posted without permission but clips featuring songs. The technology to automatically delete copyrighted YouTube files isn't quite ready yet but it will be soon.

And when the day comes when you can't hear the songs we're so excited about what is the point of a music blog? And how long before there's software that will make it impossible to post pictures or quote passages from articles, books or poetry?

The genie may be going back into the bottle but so will a lot of the magic of the Internet Age.

photo and Ikezoye quote are from The New York Times
at 11:27 AM