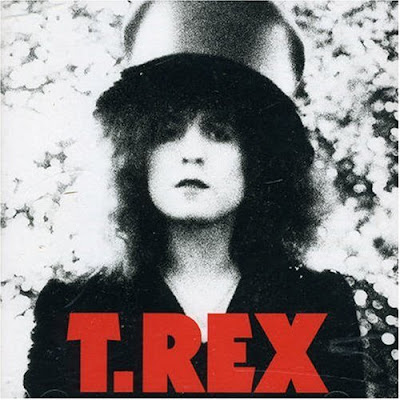 
Released in the UK on the same July day as Rod Stewart's Never A Dull Moment, T. Rex's The Slider would be the band's highest charting album in the US. It came out at the height of "T. Rex-tacy" as Rolling Stone put it.

In the UK the band had four straight #1 singles. Everybody loved Marc Bolan, the pint sized glam rocker with the curly hair. Both boys and girls. Bowie wrote "Lady Stardust" about him . Ringo Starr was following him around with a camera.  Produced by Tony Visconti, Marc Bolan  recorded most of The Slider at the honky chateau, Château d'Hérouville, on the advice of Elton John.

Bolan called "Metal Guru", one of two UK#1 singles from the album,  a festival of life song:

"I relate 'Metal Guru' to all Gods around. I believe in a God, but I have no religion. With 'Metal Guru', it's like someone special, it must be a Godhead. I thought how God would be, he'd be all alone without a telephone. I don't answer the phone any more. I have codes where people ring me at certain times."


The other #1 song from The Slider, "Telegram Sam" recycles the "Get It On ( Bang a Gong)" arrangement and introduces the world to the phrase "main man". In the UK it sold 200,000 copies in four days. Neither single did much in the US but The Slider outsold its predecessor Electric Warrior. It's a tighter album. Full of rowdy riffs.

Rolling Stone called the album "a true phenomenon". Even when you dig deep, you're getting catchy tunes.
Here's Bolan and the boys playing "Buick Mackane"


Ringo Starr ( who is credited with shooting the album cover) shot the following moment for his T Rex documentary "Born to Boogie" when Marc and Elton jammed at Apple Studios on "Children of the Revolution".

Although that single was released in 1972 it was not on the album.

Bolan has just five more years to live before an auto accident. How did he feel in the middle of the T Rex hurricane in the Summer of '72? Perhaps the following lyrics from "Spaceball Richochet" offer a clue:

How can I lay/
When all I do is play/
The Spaceball Ricochet.