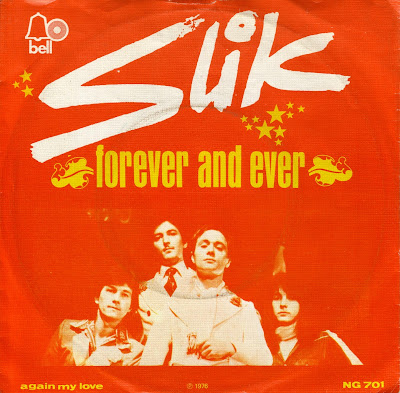 Slik : Forever and Ever

The Walker Brothers : No Regrets

With Queen's "Bohemian Rhapsody" still in the midst of its nine week reign at number one, I've decided to take a peek at the newest songs to make the UK Top 40.

33. The Walker Brothers : No Regrets

The Walker Brothers returned to the UK Top 10 for the first time in nine years with this Tom Rush cover. It would be their last hit.

Disco queen Donna Summer would hit the UK #4 with "Love to Love You Baby" despite the BBC's initial reluctance to play the record.

The Scottish glam rock band Slik would hit #1 in February of 1976 with "Forever and Ever" written by the Bay City Rollers team of Bill Martin and Phil Coulter. This is the first many of us would see and hear from Midge Ure who would later hit #1 with Band Aid ( "Do They Know It's Christmas") and as a solo artist with "If I Was". He would also perform with Visage, Thin Lizzy and Ultravox. His first solo hit, incidently, was a cover of "No Regrets" performed in the style of The Walker Brothers.

With a treatment that might remind some of Nilsson's vocals on The Point, Donny and Marie Osmond revived the 43-year old classic "Deep Purple" and made it a #14 hit in the US and a #25 hit in the UK. Today, that would be like covering a song from way back in 1973.