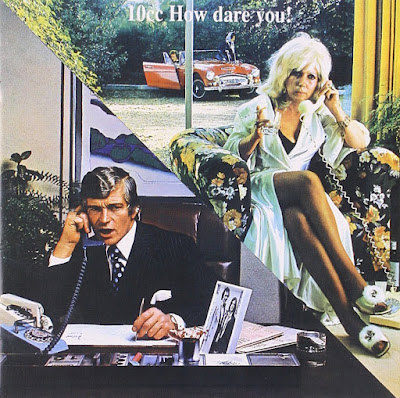 "It's as different as any album by the same band can be, and I think it's a progression from the last one. I think there's been a progression on every album and I think we've done it again. It's a strange mixture of songs. There's one about divorce, a song about schizophrenia, a song about wanting to rule the world, the inevitable money song, and an instrumental."
---Graham Gouldman ( refraining from mentioning there is also a song about blow jobs) to Melody Maker

I've decided to feature one album a month for our look back on 1976. 10cc's How Dare You! edges out David Bowie's critically acclaimed Station to Station for the month of January because if it's not the band's finest hour --that would be Sheet Music--it is 10cc's strangest hour. How Dare You! truly blew my 12 year old mind and remains, to this day, one of my favorite albums of all time.

Coming off of The Original Soundtrack and the smash hit "I'm Not In Love", the band members met to discuss the follow-up album. Drummer Kevin Godley--part of the more avant garde half of 10cc with Lol Creme-- found what was said "quite disturbing":

"It wasn't like 'let's try a bit of this' and 'let's try a bit of that', it was 'well we need one of those and we need two of those.' It was that attempt to quantify who and what we were that I found slightly troubling. It took the freedom away. It took (away)  the sense that you could just go in there and try things. The need to be fresh was slightly tarnished in a way."

(Keep in mind where a British man uses the words "slightly" or "quite", an American would probably use "very".) 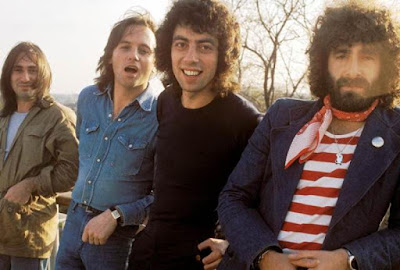 How Dare You! would be the last album all four original members recorded before the band split with Godley and Creme pursuing their avant garde notions on albums like Consequences and the brilliant L. But it doesn't exactly sounds like the duo were shackled on this album.
They were the ones who gave us "I Wanna Rule the World",  about a monomaniacal little schemer, which contains within its four minutes something like 37 different ideas, including a bombastic speech where the imp declares:

A Brave new world will rise from the ashes
And there upon a rock titanic,
I'll cast a giant Shadow on the face of the deep
And never again will they dare to call me
A freckled, spotty, specky, four eyed
Weedy little creep!

My favorite song on the album is "I'm Mandy Fly Me", a UK #6 hit that I absolutely fell in love with when I got my hands on a promo 45 a Reno radio station donated to the Washoe County library that summer. I would "check out" 45's that never actually had to be returned. In this way, I began my record collection as well as my odd obsession with great songs that never got any radio play.
At 12, I loved how "I'm Mandy Fly Me"  had movements -- like "Band on the Run" and "Uncle Albert/Admiral Halsey". That, according to Eric Stewart, was Kevin Godley's idea:

He said "I think it just gets too bland, it just goes on, on one plane, your verses and your middles and your der-der-der, they're all going on the one plane. What it needs is someone to go 'Bash' on the side of your head".
So we changed the rhythm completely, and we put two whacking great guitar solos in there, in the middle of this quiet, soft, floaty song. Once we'd got that idea in, it, it just gelled into something else.
Again, impossible to dance to, as a lot of 10cc tracks were, but once Kevin had put that in, he became the third writer in the song so we were quite democratic in that way. 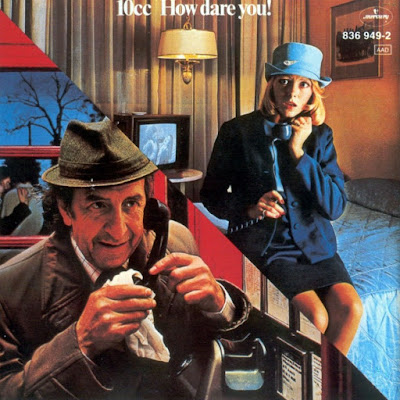 The inventiveness continues throughout the album. For every melodic "Art For Art's Sake" or "Lazy Ways", there's a wonderfully weird "Iceberg" or "Head Room". The album's final cut ,"Don't Hang Up", about Godley's divorce, inspired the Hipgnosis album cover. It ends, of course, with a dial tone.

This is the first 10cc album I owned and remains my favorite. The latest CD version comes with single edits of "Art for Art's Sake" and "I'm Mandy Fly Me" as well as a B-side "Get It While You Can" which has some lyrics ("So why be the one/ Who's out in the cold") later recycled on Bloody Tourists' "The Anonymous Alcoholic". 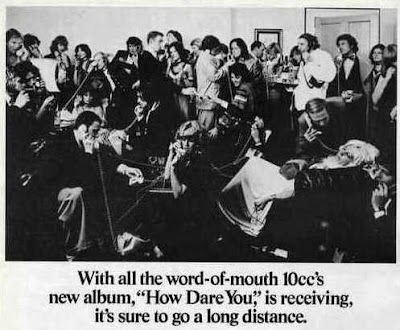 To mark the 40th anniversary of "I'm Not In Love" the BBC produced the 10cc documentary below in 2015.