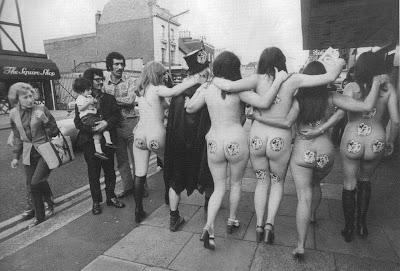 It happened on July 29, 1972. The world's first shock rocker ( sorry Alice Cooper), Screaming Lord Sutch,  is arrested for jumping from a bus and touring the city with four nude women. He is charged with "insulting behavior". How very British!

Sutch, whose 1970 debut album Lord Sutch and Heavy Friends topped a 1998 BBC poll as the worst album of all time despite having Jimmy Page, Jeff Beck and Nicky Hopkins helping him out, is trying to drum up publicity for his London gigs.

Suffering from manic depression, Sutch committed suicide by hanging in 1999.
at 2:00 AM