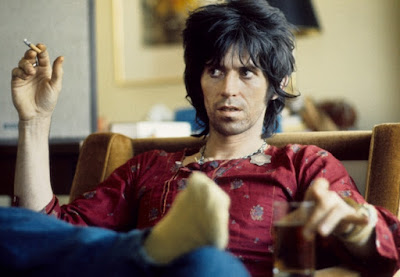 On June 6, 1976 Keith Richards went on stage in Paris with the Rolling Stones shortly after learning his two month old son Tara had died of Sudden Infant Death Syndrome. In his autobiography, Life, Richards writes that he is still haunted by the loss of his son but at the time couldn't imagine canceling the concert.

It would be the worst possible thing because there was nowhere else to go. What am I going to do, drive back to Switzerland and find out what didn't happen? It's happened already. It's done. Or sit there and mope and go bananas and get into, what? Why? I called Anita (Pallenberg), of course, and she was in tears, and the details were all confusing...
...All I knew about Tara was this beautiful little baby boy in the cradle. Hey, little bugger. I'll see you when I get back of the road, right? ...It was just a crib death. But leaving a newborn is something I can't forgive myself for. It's as if I deserted my post...I wrote in my notebook when I was writing this book, "Once in a while Tara invades me. My son. He would be thirty-odd now." Tara lives inside me.But I don't even know where the little bugger is buried, if he's buried at all.

James Fox, who co-wrote the book, said “The first time we talked about that, Keith couldn’t get out more than five words. Then we realized we had to go back to it. He told me that he thought about it every week.”

The video above is from a June 5, 1976 show, the day before Tara Richards died.