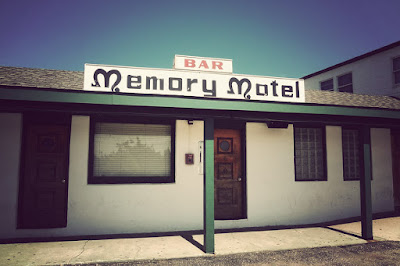 On Black and Blue, Mick Jagger sing about spending a lonely night at the Memory Motel with a woman with a peachy kind of girl who had hazel eyes,  a slightly curved nose, slightly curved teeth and a mind of her own. We may never know for sure whom he is singing about but we do know there really is a Memory Motel on Montauk, Long Island, not far from Andy Warhol's place where Jagger spent some of the Summer of 1975 rehearsing for the US tour.
Owner Estgher Agtas told Rolling Stone the Stones "were all over the place, walking around" that Summer.
How did she feel, having her 19-unit resort motel immortalized in song? "It's very nice. I just wish they'd send me some royalties".