40 Year Itch : Be Not Bellbottom Bummer 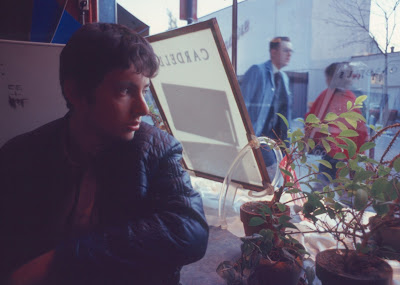 Ten years ago, Jonathan Richman strummed his guitar in clubs around Boston, where he once opened for the J Geils Band. From there, he founded the Modern Lovers, a cultishly popular rock group with Velvet Underground undertones. Warners signed them and John Cale produced some tracks including "Pablo Picasso",  with lines like "Some people try to pick up girls and get called assholes/ This never happened to Pablo Picasso". The album was not released.

But now Beserkley Records, who've gained access to the tapes, are offering The Modern Lovers on a mail-order basis ( $4.49, Home of the Hits, Box 589V, Berkeley, California 94701). Meantime, Richman, a shiny-cheeked  Jerry Mathers lookalike who disdains drugs and once wrote in a questionnaire, " We all have the power of a flaming Nova Star within us," has recorded a new album for Beserkley.

The Modern Lovers [Home of the Hits, 1976] These legendary sessions, produced by John Cale for Warners in the early '70s but never released, still sound ahead of their time. Jonathan Richman's gift is to make explicit that love for "the modern world" that is the truth of so much of the best rock and roll: by cutting through the vaguely protesty ambience of so-called rock culture he opens the way for a worldliness that is specific, realistic, and genuinely critical. Not that he tries to achieve this himself--he's much too childlike. Sometimes his unmusicianship adds a catch to a three-chord melody and his off-key singing unlocks doors you didn't know were there. But other times he sounds like his allowance is too big, as worldly as Holden Caulfield with no '50s for excuse--the first rock hero who could use a spanking. A