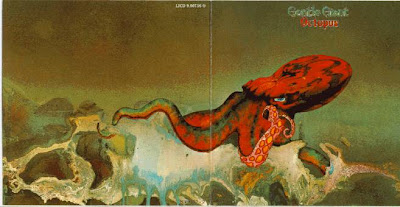 Cult faves Gentle Giant--celebrated even today for their complex, sophisticated, eccentric recordings-- had to endure the most shaming indignity before heading out on the tour to support Octopus ( released in December of 1972). They had to open for Black Sabbath: 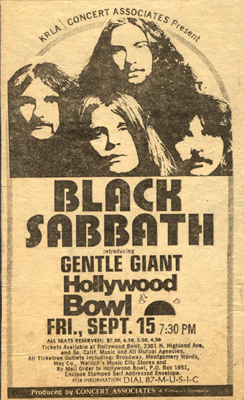 "It was perhaps the most ridiculous pairing of groups ever in the history of show business. For the most part we got booed off the stage... At a show at the Hollywood Bowl in Los Angeles, we went on stage and the Sabbath fans were shouting "get off, we want Sabbath" and we were just getting set to play 'Funny Ways'. We pulled out the cellos and violins, and the crowd starting heckling immediately, but we were gradually starting to get past it, when someone threw a cherry bomb on stage. (Phil Shulman) made sure we all stopped playing and said we needed to get off the stage. As we were leaving the stage, Phil grabbed the mic and said to the crowd "you guys are a bunch of fucking cunts!", and the boo that went up after that was enormous! To this day I'll never forget it! We were sort of vindicated later on, as we thought we were never going to play Los Angeles again after the cherry bomb incident, but later on the Octopus tour we were able to sell out consistently there, so something clicked with the fans. “” Derek Shulman on Gentle Giant's failure to win over Black Sabbath's audience in 1972

For  the Gentle Giant novice, Octopus is the place to begin. It features all the odd, multi-instrumental, multi vocal adventures and  twee and twiddly moments that are the hallmark of this band of brilliant musicians... with the benefit of being extremely listenable. 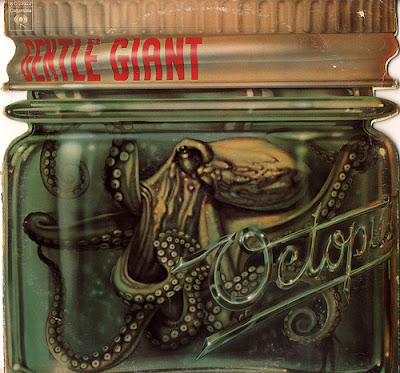 Octopus, the US album cover

One of the album highlights is "Knots" which kicks off with three part a capella vocals and then just gets stranger and stranger.

I suppose the oddest footnote to Gentle Giant is the fact that upon the band's break up, Derek Shulman became a big deal at Polygram Records. He's the guy who signed Bon Jovi.
at 2:00 AM