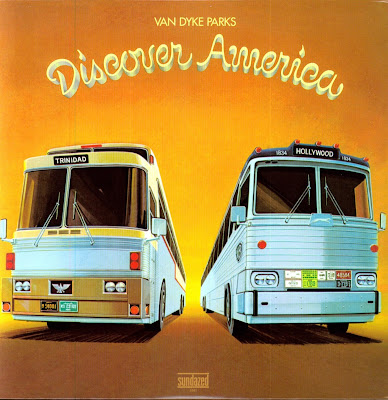 In the video below, frequent Beach Boys/Brian Wilson collaborator Van Dyke Parks doesn't really have a hell of a lot to say about his 1972 classic Discover America. So I'll try to fill in the blanks just a bit. Don't get thrown by the title. This is an album that will help you discover Trinidad. Especially the quaint , reportorial kind of folk songs made famous by calypso kings like Wilmoth Houdini and Attila the Hun. Songs like "Bing Crosby" and  "FDR in Trinidad" ( recorded on this album with the help of Little Feat) have lyrics that read like editorials in small town newspapers:

Discover America isn't all calypso and steel drums. There are covers of two Allen Toussaint songs and one by Little Feat. "John Jones" has hints of reggae. Would a major label ever distribute anything like this in 2012? Probably not. But I agree with AllMusic's decree that this is an "eclectic masterpiece of multi-cultural Americana.