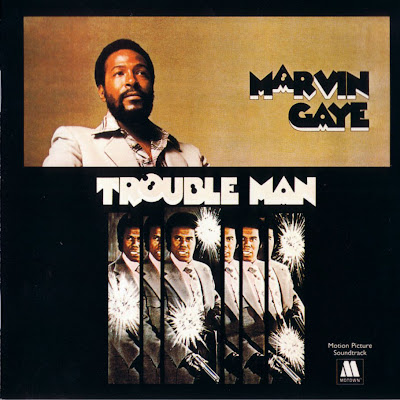 The "Trouble Man" film score was one of my loveliest projects and one of the great sleepers of all our time. I'll probably be dead and gone before I get the probable acclaim from the "Trouble Man" album, musical track, that I feel I should get. And put to a symphony, if someone took my album and did a symphony on it, I think it would be quite interesting
-Marvin Gaye

Marvin Gaye followed up his Motown masterpiece What's Going On  with Trouble Man, a great soundtrack to a not so good blaxploitation movie starring Robert Hooks as "Mr T."( Yeah , I didn't see it either.)

Marvin Gaye had been cast in a 1971 film called Chrome and Hot Leather. But he was virtually ignored by the director. As Cameron Crowe describes it in a recent NPR interview , Gaye spent most of the time hanging out with the crew "learning the craft of the movie through the men who were shooting it and that is how you really discover the beating heart of a movie...what happened was he took, I think, this experience into the studio."


Saxophonist Trevor Lawrence, who played on the soundtrack, says Marvin was very hands on. Gaye is credited with vocals, drums, keyboards and piano. The drums are often looped. The keyboard is a mini moog . More than anything else, there's an alchemy at work--of jazz, orchestra and soul.This year Universal Music has re-released a special edition of the soundtrack.Most people agree it's worth checking out--tho'  Robert Christgau dismissed the album at the time with two lines:
"Buy the single unless you like soundtrack albums. This ain't no super-fly shit"
at 2:00 AM