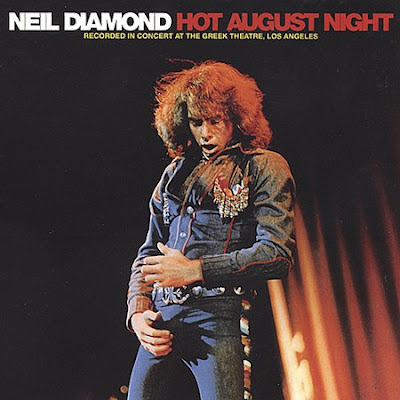 Neil Diamond followed his chart topping hit "Song Sung Blue" with a series of ten "Hot August Night" concerts at the Greek Theater in Los Angeles ( recorded for a live album released on December 9, 2012) and then a 20-concert stand at the Winter Garden Theater in New York.

Hot August Night is considered to be the ultimate Neil Diamond album, one part sterling showman at his peak; one part pure kitsch. Neil usually toured with a small rock band but for this epic outdoor setting, he brought in a orchestra that somehow doesn't overwhelm the tunes. Brimming with confidence, "Brother Love" played his hits ("Solitary Man", Cherry,Cherry", "Sweet Caroline") and some light-weight filler ("Porcupine Pie", "Soggy Pretzels"). The most recent release has 24 songs

Burned out, he announced he'd be taking a break from performing, telling the Los Angeles Herald-Examiner: "I felt strongly about taking a sabbatical. I wanted a normal existence. I wanted to remove myself from celebrity status..to do things people take for granted, like driving my son to school and having breakfast with my wife. I wanted to re-establish personal relationships with family and friends...to be home for birthdays and Christmas. To make up for times I wasn't around...to stop seeing my life as a juggling act."