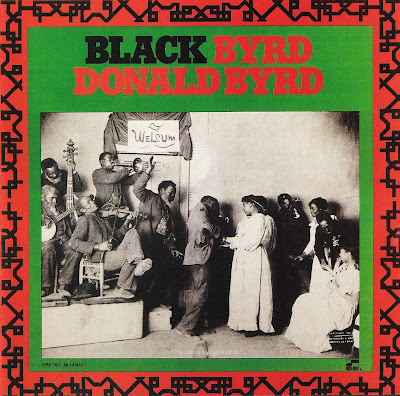 Miles Davis flirted with fusing jazz and funk on his 1972 album On The Corner.  Donald Byrd--who died at age 80 earlier this month- had a full on menage a trois with the two and became one of the most successful jazz crossover artists of the Seventies beginning with 1973's Black Byrd.

Byrd began his career as a highly sought after trumpeter during the Be Bop era. He played with George Wallington, did his spell with Art Blakey's Jazz Messengers ( 55-56). His "Cristo Redentor" from 1963's A New Perspective fused jazz and gospel.

By the 70's, after Curtis Mayfield and Marvin Gaye proved Soul Music as an art form, Byrd embraced funk. The tunes on Black Byrd have a groove. Some have lyrics. (Marvin Gaye recorded "Where Are We Going?"a year earlier). The result was the Blue Note label's best selling album at least until Norah Jones came along.


While the R and B community embraced Byrd, the jazz world did not. As Byrd said in a 1982 radio interview:

“The jazz people starting eating on me.They had a feast on me for 10 years: ‘He’s sold out.’ Everything that’s bad was attributed to Donald Byrd. I weathered it, and then it became commonplace. Then they found a name for it. They started calling it ‘jazz fusion,’ ‘jazz rock'.

His group made up of Howard University students, The Black Byrds, eventually recorded on their own and had two notable pop hits: "Walking In Rhythm" and "Rock Creek Park". Hip Hop artists sampled his music ( favoring 1975's Places and Spaces over the 1973 album) But it all started here with Black Byrd.

For a great feel about Byrd's career check out Soul Sides.Com's article.
at 2:00 AM