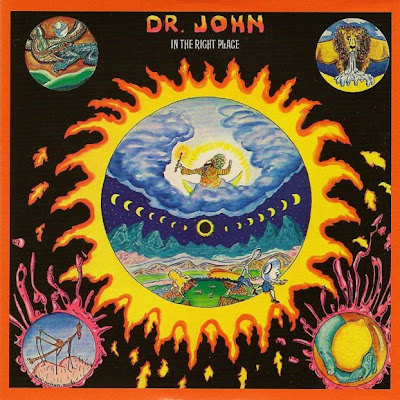 In New Orleans, Dr. John's 1972 collection of Big Easy classics, Gumbo, is the Night-Tripping album near and dear to the heart. But Dr John's best album of the 70's is his funky 1973 follow-up, In The Right Place, which rightly provided the Doctor with his biggest hit nationwide.

For Right Place, Dr John met up in Miami with his Crescent City compadre Allen Toussaint and Toussaint's house band, The Meters. The Meters were led by their keyboard player Art Neville with whom Dr John had played in New Orleans recording sessions dating back to the 1950's.


Dr John says some famous friends contributed lyrical ides to his hit, "Right Place, Wrong Time" (US #9). Bob Dylan offered up the first line : "I'm on the right trip, but in the wrong car". Bette Midler gave him "My head's in a bad place; I don't know what it's there for". Doug Sahm came up with " I was in the right set, but it must have been the wrong sign". And an old saying in the Ninth Ward provided the mystical line "I'm just in need of a little brain salad surgery". His promoter mentioned that line to Emerson Lake and Palmer who must have liked it. They named their next album Brain Salad Surgery.

In his autobiography Under A Howling Moon, Dr John writes of the album:

The album had more of a straight-ahead dance feel than ones I had done in the past, although it was still anchored solid in R and B. Atlantic pushed hard to promote it, and it yielded two hits -"Right Place, Wrong Time"  and "Such A Night" (#42).

"Such A Night", which I wrote, is a ballad, a sweet, easy groove that Allen developed into something that sounds almost like an old music hall soft shoe tune. Allen had always been one of the keys to great New Orleans R and B as a writer, player, producer and singer. I had written the songs eight year before, but Allen convinced me that we needed it for the album and I'm glad he did; it became a hit, with that fonky Allen Toussaint touch to the production.

The next recording involving Dr John was Triumvirate, a trio he formed with Mike Bloomfield and John Hammond Jr. In 1974, Dr John teamed up with Toussaint and The Meters again for Destively Bonnaoo.