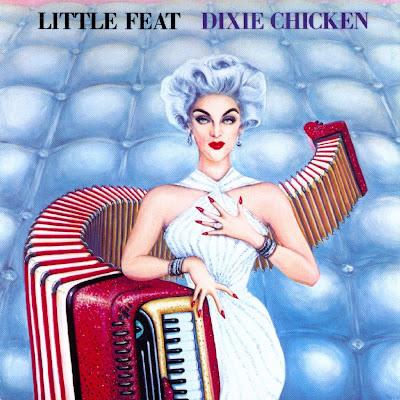 After Sailin' Shoes failed to hit , Little Feat broke up. Bass player Roy Estrada went into computer programming and was replaced by two New Orleans musicians, New Orleans native Kenny Gradney and Merry Clayton's percussionist brother Sam. New Orleans music fan Paul Barrere, a Hollywood High classmate of Lowell George's, also joined the band. The new line-up changed the sound of Little Feat as Paul Barrerre recently told Offbeat.com :
Little Feat before myself and Sam (Clayton) and Kenny (Gradney) were very cerebral. If you listen to the first two records there’s some incredibly diverse music on there. But the one thing that they didn’t do really, really well… I hate to bust ‘em on this, but they didn’t boogie. When you listen to the original “Tripe Face Boogie” it sounds pretty stiff. I think what happened when Sam and Kenny and I joined was we brought in some funk. It just got a little more soulful, and I think they all appreciated that. 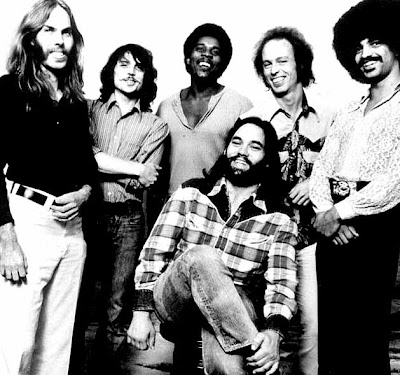 Dixie Chicken is the album that helped Little Feat find its audience. It's where they introduced their trademark lazy, grooving second line shuffle on songs like "Dixie Chicken, "Two Trains" and "Fat Man in the Bathtub"--all concert favorites. Lowell George's slide guitar never sounded better. But if the album is full of good vibes, it didn't necessarily feel that way to George as he revealed to an Australian broadcaster:

Dixie Chicken had a very thick sound because there was a lot of overdubbing done. As a matter of fact the song Dixie Chicken had nothing except the original conga part on it from the original session. And drums were overdubbed, and nobody does that. I mean you do, but you regret it later. I had a very good engineer at that point, Richie Moore, who got a very good drum sound on that particular tune. And so I just plodded right through as best I could. And it was fun. That whole album took a great toll emotionally and physically. I collapsed for two weeks after it was over.

While the band sounds like they finally got it together, the label didn't see it that way. Warner Brothers wouldn't invest in promoting an album by a band that looked like it would break up any minute. And they were right. Little Feat were always breaking up, getting back together, recording and touring.


They would get close, especially on the 1978  live album Waiting For Columbus, but they would never top Dixie Chicken. In 1979, in the middle of a solo tour, Lowell George collapsed and died of an apparent heart attack. He was 34.