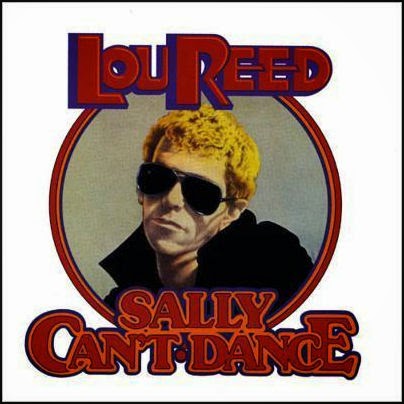 Lou Reed was firmly caught up in the rock 'n roll machine by the time Sally Can't Dance, his highest charting album, was released in August of 1974. Launched into stardom by the Bowie-produced Transformer, Reed then released the concept album Berlin , followed by a tremendous live recording, Rock 'n Roll Animal.

Compounding the hectic schedule ( all but "Kill Your Sons" were written in a single month) was Reed's own all-consuming heroin addiction. 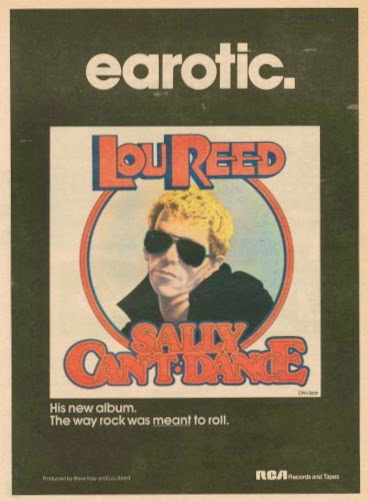 As an artist Lou not totally there...He had to be propped up like a baby, with things done for him and around him . Clearly, this was the situation he wanted. The drugs were becoming just too much for me to deal with.

Late on he started giving out interviews claiming he was 'surrounded by schlock artists'. Not so...He simply refused to be there. Most of the time he was in the bathroom shooting up.

Not the kind of thing Reed admitted to openly, telling the Australian press "I don't take drugs. I want people to take drugs".

40 years later, Sally Can't Dance sounds like an album for which Lou Reed has been miscast. This might have been a good album for Alice Cooper, but there are few highlights for Reed. The ten year old, autobiographical rocker,  "Kill Your Sons", is the best thing on Sally Can't Dance but I have a soft spot for a few other tunes including "Baby Face" which probably gives us some insight into Reed's drug issues and relationships with transsexuals.

The most that I can remember about doing this album is that I met with Lou Reed at The Ninth Circle, an old gay bar on Christopher Street where Edward Albee drank, as well as my very own self. He brought a shoebox filled with SX-70 Polaroids of various drags and transexuals in all forms of undress, some even tightly swathed in Saran Wrap. One of these was Sally, who can't dance. I put her face reflected in a close-up of his sunglasses on the back of the album. He was a handsome man, in a damaged sort of way.

When the album hit top 10, Reed--who was touring Europe during the final mixes-- dismissed it, saying ,

"It seems like the less I'm involved with a record, the bigger a hit it becomes. If I weren't on the record at all next time around, it might go to Number One."

RCA would churn out another live collection before Lou Reed would have his revenge: 1975's Metal Machine Music.