I'm Not an Animal 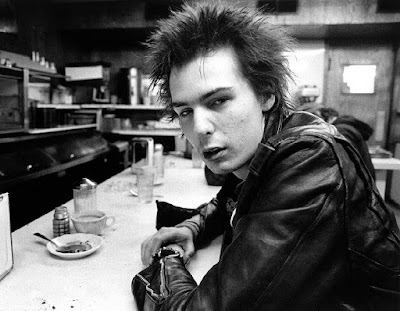 "If Johnny Rotten is the voice of punk, then Vicious is the attitude."
-Malcolm McLaren


On February 15, 1977 Sid Vicious joined The Sex Pistols, replacing Glen Matlock on bass despite the fact that he couldn't play the instrument. What Vicious brought to the stage was charisma, something quite apparent in the video below.

Sid Vicious had fewer than two full year to live. Hospitalized with hepatitis during the recording  of Never Mind the Bollocks...Vicious played bass and has a songwriting credit on on one of the band's most hated songs"Bodies", but it was later overdubbed by guitarist Steve Jones.

The Sex Pistols would play their last gig in January of 1978. By then Vicious and girlfriend Nancy Spungen were full blown heroin addicts. In October of 1978, Vicious was arrested for stabbing Spungen to death. In February 1978, Vicious overdosed on heroin. His mother says she found a suicide note that read :"We had a death pact, and I have to keep my half of the bargain. Please bury me next to my baby. Bury me in my leather jacket, jeans and motorcycle boots. Goodbye."