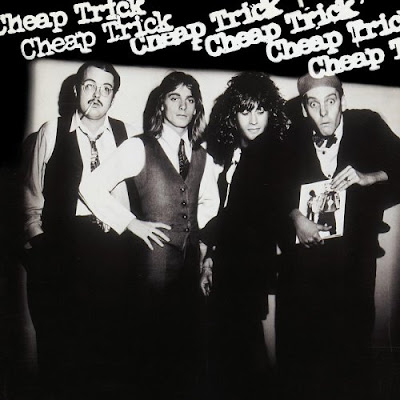 In February of 1977, the hardest working band in America released their debut album, the self-titled Cheap Trick. Produced by Jack Douglas ( Aerosmith), the album features a harder rocking sound than the later classic Cheap Trick albums that followed ( In Color, Heaven Tonight) . That said, there were songs that anticipated their hit making power pop sound like "Oh Candy", which was sadly inspired by the band's friend and photographer Marshall Mintz who killed himself by hanging. ( His initials M and M led to the Candy nickname).

Other favorites are "Elo Kiddies", the Beatlesque "Taxman Mr Thief" ( have you heard the Ardent Studios demo ?) and the dreamy "Mandocello", which is the name of am eight stringed instrument related to a mandolin.

I like what Jason Hernandez wrote in his RateYourMusic review : Any time any band "rocks" and delivers great pop at the same time, I compare them to Cheap Trick. Cheap Trick are the fizziest soda pop, the greasiest cheeseburger, the gooiest ice cream, the coldest beer, and the chewing gum with the flavor that lasts the longest. 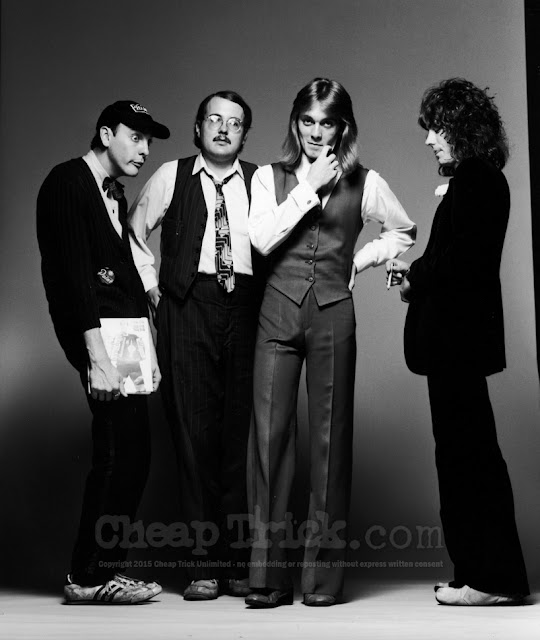 For Rolling Stone Charles M Young wrote These guys play rock and roll like Vince Lombardi coached football: heavy emphasis on basics with a strain of demented violence to keep the opposition intimidated. The closest musical analogy is the Who, who have always sounded like the inmates of Bedlam on their best stuff. Cheap Trick not only sounds like their attendant forgot to lock their cages, they look like it, too. Half the fun of the album is staring at the pictures on the back and wondering if lead guitarist Rick Nielson really has fire ants in his underwear, and how Boris Karloff mated Henry Kissinger with Adolf Hitler to come up with drummer Bun E. Carlos.

Rock critic dean Robert Christgau gave the album a B, writing "I like their looks--two pretty-boys balanced off by two ugly-guys--and have no objection to their sound, which recalls the Aerosmith of Rocks. Nor am I shocked that they're not as powerful as the Aerosmith of Rocks, Jack Douglas or no Jack Douglas. But given their harmony singing you think they'd try and be more melodic. Sign of smarts: the way the phrase "any time at all" hooks 'He's a Whore.'"

The boys from Rockford would open for Queen on their 1977 American tour and win praise from Japanese rock journalists. The following year, 5000 Japanese fans would greet the band at the airport.
at 2:00 AM