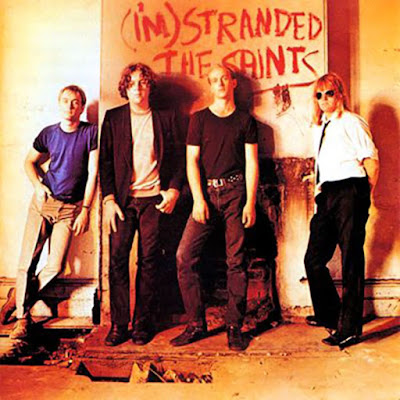 The Saints : No Time

"I remember thinking 'This is obnoxious. This is probably the most obnoxious record ever made. Isn't that great?'"
Chris Bailey, The Saints

On February 21, 1977 The Saints released (I'm) Stranded. Hampered by neither the cartoon imagery of The Ramones nor the ad hoc background of The Sex Pistols, The Saints rival The Clash as punk's purest expression. Recorded live over two December days in Brisbane, Stranded is every bit as raw as the 1976 title track, which was famously selected by Sounds reviewer John Ingham as "Single of this and every week". Ed Kuepper's buzzsaw guitar dominates the proceedings, drowning out vocalist Chris Bailey's lyrics.

Bailey says " I remember both Ed and I saying at the time 'OK. This was a good demo session. When can we record? And the response from EMI was 'No. It sounds just like your single so it must be a record.'"

EMI had just dropped the Sex Pistols and were in desperate need of a credibility.

Early reviews were favorable. Jon Savage calling the album “up there in punk Valhalla with Ramones and Raw Power”. In his B+ review Robert Christgau wrote

With its intermittent hooks, droning feedback, shouted vocals, and oldie about incest, this album from Australia achieves the great mean of punk style. Five years from now, it could sound like a classic or a naive one-shot. At the moment, it's recommended only to addicts.

In May of 1977 The Saints would move to London where they'd play a Roundhouse gig with Talking Heads and The Ramones. But the long haired Ozzies--to their credit-- would never fit in with costumed punk scene.