The Rags Of My Life 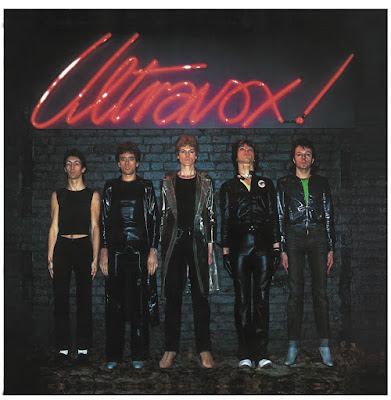 Cheap electric guitars made the Sixties possible. The same thing was happening now. Synthesizers has just got cheap. All this stuff had just evolved and I thought this is it. This what I'm interested in .
-John Foxx, founder of Ultravox!

Years before "Dancing With Tears in My Eyes" peaked at #3 in the UK Charts, Ultravox! was a different band, inspired by David Bowie, Roxy Music and aware enough of Krautock to borrow Neu's exclamation point for their own name. To these ears, they even sound a bit like the fledging band in the 2016 film Sing Street. Released February 25, 1977 the album obviously inspired Duran Duran,  especially songs like "The Lonely Hunter".

Although much is made of Brian Eno's involvement in the recording, practically nothing Eno did made the final cut, which failed to capture Ultravox! high powered live show.  "Dangerous Rhythm" was the single. "The Wild, The Beautiful and the Damned" perhaps the most representative of the times, but "I Want to Be a Machine" foreshadowed Gary Numan's sound as well as the mindset that would eventually lead to  Foxx leaving Ultravox in 1979 to be replaced by the more pop conscious Midge Ure.