Now I Got A Reason 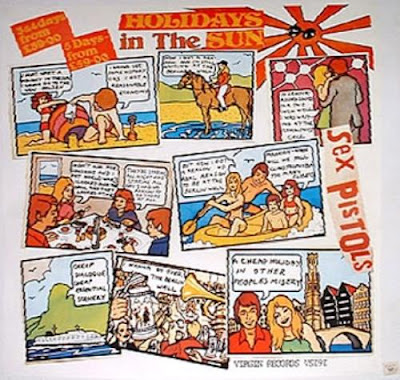 Sex Pistols : Holidays in the Sun

On October 14, 1977 The Sex Pistols released "Holidays in the Sun". A #8 U.K. chart hit from the forthcoming album Never Mind the Bollocks, Here's the Sex Pistols, this would be the last single with John Lydon singing. Lydon says the song was based on a disappointing holiday in Jersey, followed by a visit to rainy Berlin where, at least, they were far away from London:

"Being in London at the time made us feel like we were trapped in a prison camp environment. There was hatred and constant threat of violence. The best thing we could do was to go set up in a prison camp somewhere else. Berlin and its decadence was a good idea. The song came about from that. I loved Berlin. I loved the wall and the insanity of the place. The communists looked in on the circus atmosphere of West Berlin, which never went to sleep, and that would be their impression of the West."