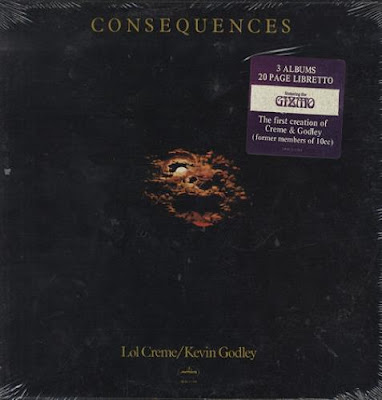 In October of 1977 former 10cc members Lol Creme and Kevin Godley released Consequences, a boxed triple disc that began as a demonstration album for the pair's invention, the gizmo. The album too 18 months to make, during which the punk scene exploded all over the U.K.

"There was a seismic, paradigm shift. I knew we were doomed. We emerged blinking into the light, and everyone was wearing safety pins and bondage trousers. We'd been working on a semi-avant-garde orchestral triple album with a very drunk Peter Cook and me singing with Sarah Vaughan, while outside it was like a nuclear bomb had dropped."

The reviews were devastating. Lol Creme shook them off but he says his partner was hurt by the negative feedback :

"Kevin was heartbroken, I don't think he's got over it yet. He was really, really upset about the way it was received, like a big turkey, really. I didn't take it the way Kevin did, to be honest, because I loved doing it so much and I learned so much, got so much out of it, a totally selfish thing, I didn't give a shit, I really didn't. And I never have, to me it's the doing of something that's the vibe, it's not necessarily the result. It's always a bonus if what you do does well, but it's not that precious, you know. I've always thought like that. "And I could see why it was laughed at, it does look like a pretentious pile of old stuff. We were self-indulgent pop stars, there's no question about it."

I have yet to get through the entire thing without fast forwarding through the dialogue sections. Godley and Creme would make up for their indulgences with a remarkable follow-up in 1978 called L.