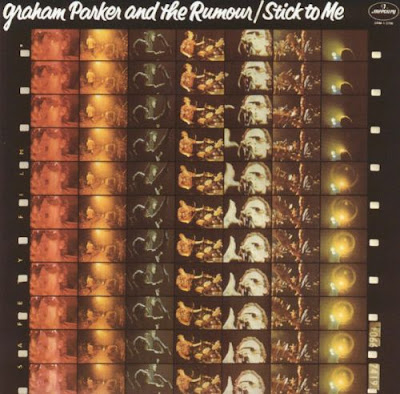 Graham Parker and the Rumour : Stick To Me

In mid October 1977, Graham Parker and the Rumour released Stick To Me. Despite the cover, it's not a live album but a collection of songs hastily recorded after one of the worst production mishaps in rock history. The timing couldn't have been worse. Following Howlin' Wind and Heat Treatment, Stick To Me was one of the most anticipated albums since Bruce Springsteen's Born to Run.

"...for "Stick to Me," we had an 80-piece string section playing. But the whole album had to be scrapped because the master tape was leaking oxide or something. The producer {Mutt Lange}, again, didn't seem to spot it. We saw this black stuff coming off the tapes but he didn't notice it. When we came to mix it, it was un-mixable. The hi-hat was leaking through all the tracks. It was a nightmare, because we had a tour coming up. In those days I had a manager, and managers are always saying, "We have to play in Sweden now," like that's the most important thing to do. So we re-made the record in a week with Nick Lowe. It's not what I wanted at all. It's a very intense, grungy-sounding record, but I kind of like it now for that reason. I think people are trying to get that sound now, and have been since the late '80s, when we finally got rid of that Phil Collins drum sound and got real again. If a band made a record like that now, it would be hailed as a great low-fi record. But in those days, of course, the American press panned it. They thought I should sound like Boston or Journey or something. They thought I should have a slicker sound. But they had a point."

The Rolling Stone review by Dave Marsh blames Nick Lowe ( who basically came in to rescue the day) for the muddy production but advises fans to stick around.

It is painful enough to be disappointed in this record for the things that are Graham Parker's fault. It is completely unnecessary, however, to again suffer through such an amateurish technical presentation, which veils a great and potentially essential rock talent. If Parker's advisers are devoted to him, they'll get him to a professional recordist, but quick. Graham Parker's talent begs him to conquer the world and spin it on one finger — and he could do it, too. But Stick to Me is only what the title implies — a holding action. Anyone who's heard Parker will hang around, but you'll pardon our impatience: this boy's time is now.

Labels: 1977, Graham Parker and The Rumour, Stick To Me