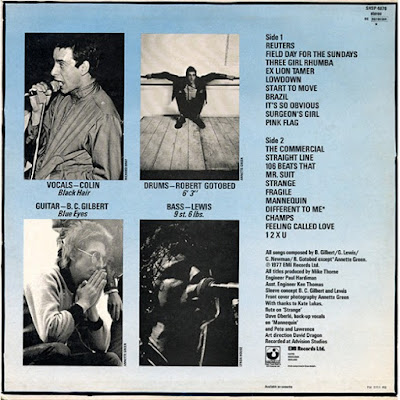 To mark the shortest day of the year:

1978 would likely be the year that the great 3:00 pop song ( or new wave tune) made its return, but short and succinct could also be found in 1977.  Yes, while Joni Mitchell took an entire side of an album for a song called "Paprika Plains" and the Grateful Dead needed more than 16 minutes for its "Terrapin Station" suite, some artists cut straight to the point.

Wire : Field Day for the Sundays

At 28 seconds, Wire's shortest song on Pink Flag still found time for a false ending and a repeat chorus. My favorite album of the year featured six songs under a minute and NO guitar solos.

It's probably cheating to include a reprise in this list but I'd argue these are the best thirty seconds on the bloviated Consequences.


Earth Wind and Fire : In The Marketplace (Interlude)

At 43 seconds, this experimental tune might have been on one of Brian Eno's albums, Instead, it's a small scene setter on Earth Wind and Fire's finest album, All 'n'All.

Yes, it's another reprise. The final track on Kraftwerk's magnificent Trans Europe Express runs 55 seconds and leaves the perfect after-taste in your mouth.

From the Do It Yourself English punk rockers, the 58 second "Handlebars" ends with a rallying cry for every would be musician : "It was easy. It was cheap. Go and do it!"


The Damned : Stab Your Back

Drummer Rat Scabies gets sole songwriting credit on this minute long gem from the Damned Damned Damned which repeats the title 24 times.