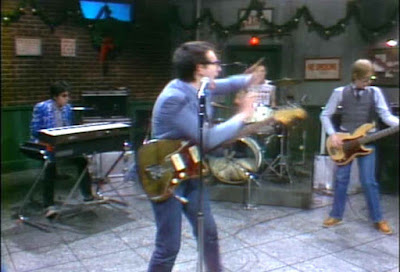 On December 17, 1977 Elvis Costello interrupted his own performance of "Less Than Zero" to perform "Radio, Radio" on Saturday Night Live. Costello waved his hands at his bandmates and announced to the audience "I'm sorry, ladies and gentlemen, there's no reason to do this song here."

Actually there was a reason. Record company reps wanted Costello to play the catchy tune to helps sell copies of My Aim is True. But for Costello, that was already the old record and besides, the song is about former British Union of Fascists leader Oswald Mosley. Nobody in America knew who Mosley was.

But they might understand the point of "Radio, Radio", a protest song about corrupt commercial radio stations whose playlists rarely included punk rock songs or anything that wasn't paid for by a major label.


In his book Unfaithful Music and Disappearing Ink, Costello remembers the moment :

There was panic on the studio floor.
We were not even certain if we were still on the air, but the light on the central camera stayed on through the first verse, and my eyes darted around looking for signs that someone was still calling the shots.
The Attractions drove on through the song and I sang it for all I was worth. It felt good, but it was hardly a revolutionary act.
I took a full bow at the waist, the way The Beatles had on Thank Your Lucky Stars, unplugged, and walked straight off the set past the cameras before the applause ended, followed by various scampering Attractions.
Then it was over.

Only later did Costello learn from Bill Murray that producer Lorne Michaels has been giving Costello the finger during the performance.

It would be more than ten years before Costello was invited back to Saturday Night Live.

On this very same night, in this very same city, David Bowie went onstage at Max's Kansas City to introduce a band he helped get signed with Warner Brothers: Devo. Original plans were to have Bowie produced the debut album. Instead the honors went to Brian Eno.

Still, there are rumors of a jam session involving Devo, Bowie and Eno and there may even be a tape somewhere. 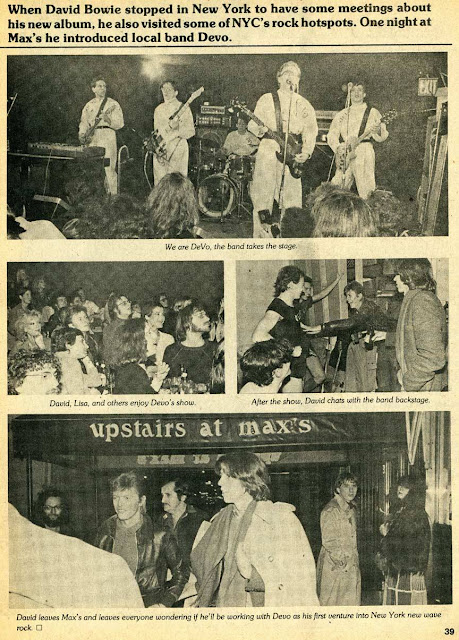