We're All Lying in Hell 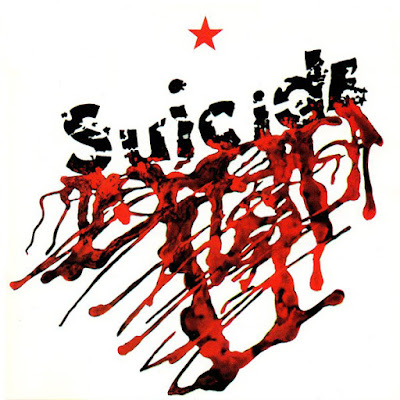 In December of 1977, Suicide released its debut album. For six years the duo of Alan Vega and synth-man Martin Rev performed for baffled, often hostile audiences in New York City's Lower East Side. While Rev made the most out of a $10 Japanese keyboard, Vega sang songs of doom with an echoey rockabilly voice.

You've truly got to be in the right mood to listen to this album, a bright, sunny day at the beach may not be the best location. The highlight, if you will, is a ten minute epic called "Frankie Teardrop"which ahas been called the most terrifying song ever. It's about a factory worker who, despite working ten hour days, can't make ends meet and is facing eviction. He snaps, killing his six month old son and his wife before turning the him on himself. Vega's screams may be may the most blood curdling thing you ever hear.

"Oh, my God! That's one of the most amazing records I think I ever heard. I love that record," Bruce Spingsteen told Rolling Stone.

"23 Minutes Over Brussels," included as a bonus on the CD reissue of Suicide's classic, eponymous debut album, gives some indication of the public's reaction to this confrontational duo in their heyday. Recorded on June 16, 1978, when Suicide were supporting Elvis Costello at the L'Ancienne Belgique ballroom, it shows a riotous crowd pelting the duo with chairs and bottles.

Utilizing a primitive drum machine, Martin Rev's mutant fuzz organ, and Alan Vega's blues holler, Suicide had been performing for six years before unleashing their debut at the height of punk. With their roots in the New York art scene, their provocative name, nihilistic attitude, and the lack of rock 'n' roll accoutrements such as a drummer or guitarist, they often aroused violent reactions in their bewildered audiences.

Arriving in a sleeve full of slash-and-blood imagery, and sounding like a nightmarish netherworld, Suicide's technical and musical innovations make it sound almost contemporary today. "Cheree," lifted as a single, is a piece of sweet electronica, while the manic electro-billy of "Ghost Rider" proved to be a massive influence on the likes of 50ft Cell and The Sisters of Mercy. Psycho- monologue "Frankie Teardrop" is unnervingly intense and features the most spine-chilling scream committed to vinyl, while the album concludes with the icy mechanized cellos and haunting vocals of "Che."