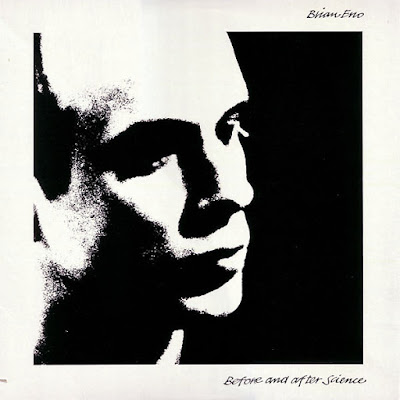 In December of 1977, Brian Eno released his most diverse album of the 1970's, Before And After Science. Having collaborated with David Bowie on two albums recorded in Berlin, Eno was stepping out on his own with an album he wasn't completely satisfied with.

Side One offers Eno's last foray into rock music of the decade, including the single "King's Lead Hat", an anagram of Talking Heads with whom he had originally hoped to record the song. You can easily imagine David Byrne singing this song. Phil Manzanera is playing the frenetic guitar.

"Kurt's Rejoinder" makes history by sampling a 1930s recording of ‘Sonate in Urlauten’ (or ‘The Ursonate’)– a phonetic poem by Dada affiliate Kurt Schwitters .

Side Two is mostly instrumental, a return to the spacious sounds of Another Green World. Though Eno questioned the quality of the album, Before And After Science got very good reviews. 'Heroes' may have topped the NME chart, but Eno's album finished at No. 14, just ahead of the Jam’s In the City. Eno would have to wait until the following year to learn the album, released in the Spring of '78 in the States, had finished No 12.

Labels: 1977, Before and After Science, Brian Eno, King's Lead Hat