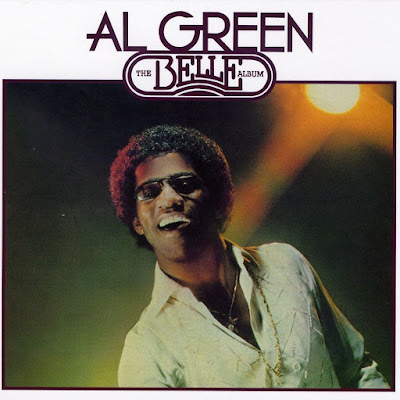 On December 6,  1977 Al Green released The Belle Album, his first recorded without his legendary Hi producer Willie Mitchell. In fact, Green played guitar and used a pick up band  and his own home built studio to record an album that seems to grow in reverence every year among music critics and fans.

Al Green wasn't just changing how he recorded music. He was changing the entire direction of his life. He bought a church,  the Full Gospel Tabernacle, in Memphis and made himself the pastor. Fans didn't need to be listening too closely to know Green was a religious man. 1973's Call Me had "Jesus Is Waiting". 1974's Livin' for You had a song on it called "My God Is Real" and Al Green Explores Your Mind had "God Blessed Our Love". On The Belle Album's title track, Green sings“It’s you that I want, but it’s Him that I need.”

I've always thought Al Green might have been more eccentric than the Willie Mitchell produced sides ever gave away.  Listen to the way the Hi Records studio band responds to Green's exaltations "We Got the Feelin' Now!" with "Shut up Al Green" at the beginning of the 1969 recording of The Beatles "I Want To Hold Your Hand". Willie made sure Al came across as the smooth loving man but there was more going on there . Here, eight years later, is Al Green at his most eccentric.

Did the music critics understand what they had on their hands or were they confused. Robert Christgau gave the album an A, writing

Since 1975 Green has been making albums on which two or three real songs were supplemented by material so vague and unpredictable it almost announced itself as filler improvised in the studio--which is not to say I didn't find much of it hypnotic. Now, on a self-produced album focused around his own (frequently acoustic) guitar, the filler comes front and center with new assurance and perhaps even its own formal identity; the real songs themselves--his best in years--sound improvised in the studio. And more than ever, it all holds together around Green's agile rhythm, dynamics, and coloration and his obsession with the soul-body dualism at the heart of the genre he now rules unchallenged.


And Rolling Stone's critic, Greil Marcus, suggested this may be Green's best album.

In rock and  roll, nothing seems easier or more obvious than a good beat, but nothing is more elusive. We may someday look back on The Belle Album as Al Green's best — it's too soon to know; the man has a lifetime ahead of him — and if we do, the beat will be the reason. Whether or not the seemingly effortless religious conviction of the songs Green has written for this record lasts as long as he does, the beat will never wear out.

"All n All" is the number that not even a reprobate could deny; like the Sistine Chapel or Bessie Griffin's "Too Close to Heaven" (on The Gospel Sound, Volume 2, CBS), it carries a sense of liberation and purpose deep enough to make the sinner envy the saved. The beat is very light; in terms of gospel, soul or rock and  roll, the beat seems so natural as to be preordained. If it's true, as the Coasters announced in "That Is Rock and  Roll," that "in the beginning...there was nothing but rock," then this is what the deity had in mind when the message came rolling down the mountains: "Nothin fancy."

I blaspheme, but "All n All" makes me giddy. Green floats with the music, picking up momentum — but so subtly you don't notice that the song is increasing in force until he breaks the tune open with high, perfectly timed wails so surprising and unfettered he sounds as if he's hitting a note he's been reaching for all his life. I was stunned hearing this: I half-expected Green to start speaking in tongues, but, in a way, he already was.

This is a completely idiosyncratic album — Green produced it, cowrote all the songs and plays precise acoustic and electric guitar — but it's hard for me to understand how anyone could find it inaccessible. Its subject matter — God's grace, and how good it (It?) feels — isn't pushed; there's no ad for Green's ministry on the back cover, and while most of the lyrics are religious, the only song title that even hints at anything beyond the secular realm is "Chariots of Fire." "I Feel Good" endlessly repeats "There's something about King Jesus/That makes me feel fine," but it took many listenings before I realized Green wasn't singing, "There's something about my baby." It's a powerhouse of a recording — the Big Beat, disco-hard rock — and you don't have to listen to the words at all. You do have to listen to the horns, playing charts with as much joy in them as those of "Midnight Hour" had drama.

The lyrics of The Belle Album are nevertheless quite interesting. Green kicks the record off with what I suppose is the key line (from "Belle"): "It's you that I want/But Him that I need." He thus joins a long line of rock and roll want/need oppositionists — from Bob Dylan with "Memphis Blues Again" to the Rolling Stones with "You Can't Always Get What You Want," to name only the best. He leaves them behind in his attempt to resolve the contradiction: Green tries to get Belle to accept Jesus, too. With its half-buried asides about "drunken country bars," the song soon grows very spooky; it has the feel of a long journey to it, akin to Music from Big Pink.

"Georgia Boy," more like The Band, is a seven-minute slow walk through the piney woods, beginning with the ancient, anonymous blues lyric, "Just because I'm from the country," and finally closing with a statement of quiet pride that, perhaps in spite of itself, sounds like a warning: "South's gonna do it again...." The music is far more dreamlike than that of the lovely "Dream"; the textures are very dark on "Georgia Boy," almost in the manner of a Jamaican dub album like Burning Spear's Garvey's Ghost. No less the song of a free man — that is, a man who's won his freedom — than "All n All," "Georgia Boy" simply takes place in a more difficult world, where grace does not seem obvious.

The arrangements are a little looser, the sound a little rougher on The Belle Album than on Green's records of recent years. Still, the drums are as full and bright as ever, the music of a piece with "Funny How Time Slips Away" and "Tired of Being Alone," if not quite with "Look What You Done for Me." Green's music is changing, but simplicity — simplicity of intent, which perhaps here means directness of feeling — is still its foundation. Not a hint of decadence has crept into Al Green's music since he first came to our attention in 1970. He still sounds as if he's on the verge of great discoveries.