Happy New Year from The Ramones 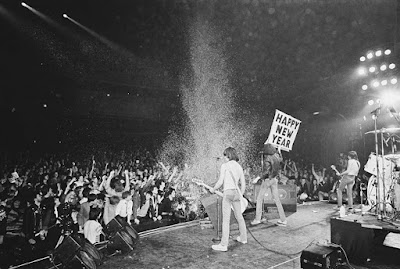 On December 31, 1977 The Ramones played a New Year's Eve concert at The Rainbow in London. The show was recorded and released as It's Alive in 1979 with 28 songs in a running time of 53 minutes.

In his memoir, Commando, Johnny Ramone writes of that night :

I think our peak, our greatest moment, is that New Year's Eve show of 1977 into 1978. I think that's our greatest moment as a band.
The recording of It's Alive was probably the best show that The Ramones ever did. We knew they were recording for a live album, and we were ready. Whenever it was important, we would rise to the occasion. I would concentrate more; I would try harder.