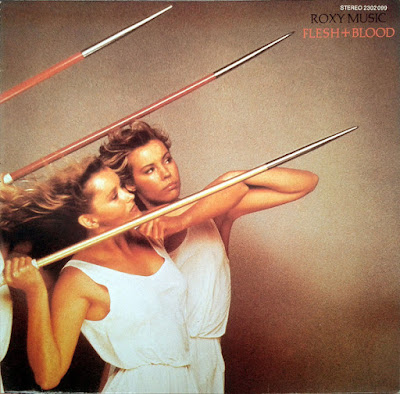 On May 23, 1980 Roxy Music released Flesh + Blood, another collection of stylish dance songs and trance-inducing grooves that give Ferry room to croon about a lost love as tears drip down his cheeks and drop-PLIP!-into his champagne glass.

At the start of the tour for the preceding album, Manifesto, drummer Paul Thompson broke his thumb in a motorcycle accident and,  just like that, he was out of the band. Only the trio of Ferry, Phil Manzanera and Andy Mackay remained. Here they are supplemented by session men for an album that would be Roxy's second to top the UK charts. ( Siren was the first.) 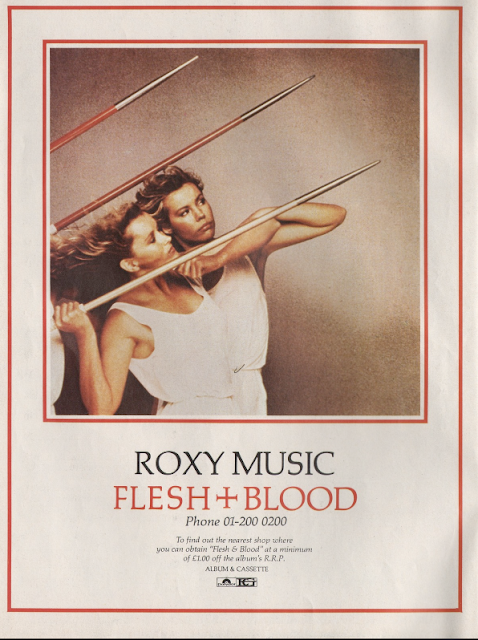 The chart success happened despite critics who found Flesh + Blood, and its two covers, a bit thin on substance.

"Flesh + Blood is such a shockingly bad Roxy Music record that it provokes a certain fascination," wrote Rolling Stone's Ken Tucker, who saved his most biting criticism for the singer:

Perhaps he’s just being defensive, because if the rest of Roxy Music is as bored as they seem, Bryan Ferry sounds positively bound and gagged. The best he can do is add a little tension by muttering the lyrics through clenched teeth and a constricted throat. He seems to be trying to get his messages out to us without the other musicians hearing him. 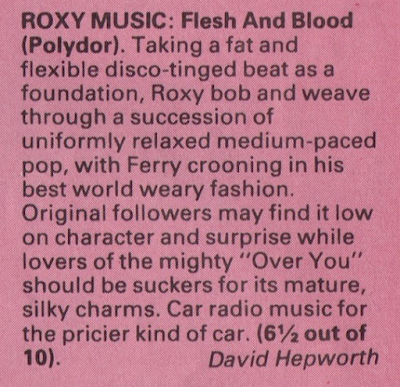 And from the Dean, who gave the album a grade of B:

Except maybe on "My Only Love"--imagine a song of that title written for (no, rejected by) Perry Como--this never sinks to their Liebschmerz-drenched nadir. But the secondhand funk is getting too easy to take. Much as I enjoy the languorous "Midnight Hour" and above-it-all "Eight Miles High," I always get suspicious when covers overwhelm originals.