"We Are Glass" provides Gary Numan with another UK #5 hit 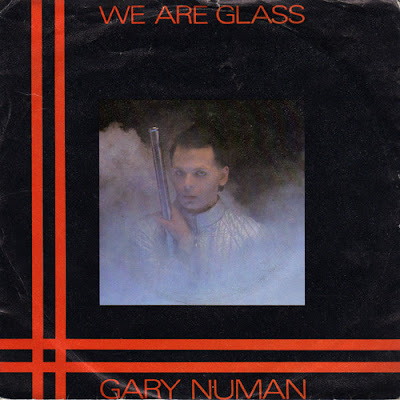 Gary Numan : We Are Glass

In May of 1980 Gary Numan released the UK#5 single "We Are Glass", a song that marks the return of electric guitars to his sound. Numan plays the crunchy guitar himself. What's the song about? Numan said in a 1981 radio interview

"Somebody once told me, a man from (the science magazine) Omni, said that he thought I'd been put here by ... something ... aliens or something, to carry out a cause ... which I thought was very flattering but a little silly. ... 'We Are Glass' I wrote because of that, y'know, like all pop stars are put here for reasons."

Numan would soon tire of his Numanoid look, complaining that he felt like an extra in Star Wars, ( in 2017 that no longer seemed to bother him) and reading  reviews like this one in Smash Hits: 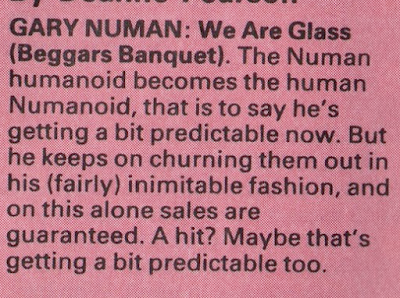 The surprising B-side of "We Are Glass" is the first movement of Erik Satie's "Trois Gymnopedies,"originally composed in 1888,  in an arrangement that added guitar, bass and synthesizer to the original's solo piano part.