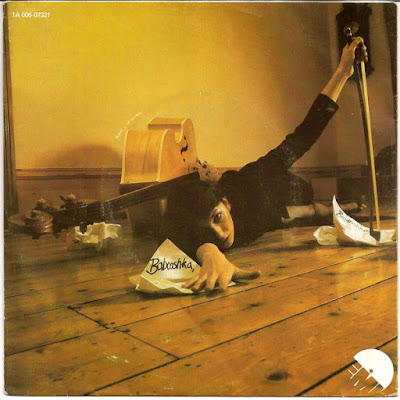 In July of 1980 Kate Bush's single "Babooshka" raced up the UK charts to peak at #5. Though "babooshka" is Russian for grandmother, the song is about a wife who tests her husband's loyalty by sending him perfume-scented letters. The letters remind the husband of his wife "before the tears/And how she was before the years flew by/And how she was when she was beautiful".

Kate would tell Countdown in Australia, where the song hit #2:


It was really a theme that has fascinated me for some time. It's based on a theme that is often used in folk songs, which is where the wife of the husband begins to feel that perhaps he's not faithful. And there's no real strength in her feelings, it's just more or less paranoia suspicions, and so she starts thinking that she's going to test him, just to see if he's faithful. So what she does is she gets herself a pseudonym, which happens to be Babooshka, and she sends him a letter. And he responds very well to the letter, because as he reads it, he recognizes the wife that he had a couple of years ago, who was happy, in the letter. And so he likes it, and she decides to take it even further and get a meeting together to see how he reacts to this Babooshka lady instead of her. When he meets her, again because she is so similar to his wife, the one that he loves, he's very attracted to her. Of course she is very annoyed and the break in the song is just throwing the restaurant at him... (...) The whole idea of the song is really the futility and the stupidness of humans and how by our own thinking, spinning around in our own ideas we come up with completely paranoid facts. So in her situation she was in fact suspicious of a man who was doing nothing wrong, he loved her very much indeed. Through her own suspicions and evil thoughts she's really ruining the relationship

The song peaked at #5 in Italy where Kate performed on stage with actor Gary Hurst.
at 12:30 AM