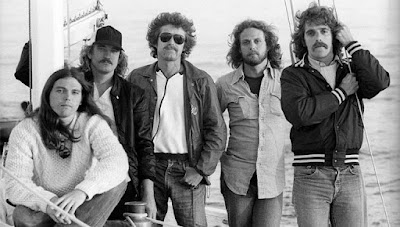 The Eagles : The Long Run

On July 31, 1980, in Long Beach, California,  The Eagles played their last show together for 14 years. Don Henley famously said that they would only reunite ‘when hell freezes over’.

"It had stopped being fun," Glen Frey later told the Independent. "We no longer trusted each other's instincts, so there was considerable disagreement. Plus, both Henley and I had developed drug habits, which didn't help matters."

It all came to a head onstage after Don Felder said "You're welcome...I guess" to Sen Alan Cranston who thanked the band for playing a fundraiser for his campaign. Frey took it personally.

On stage Frey can be heard muttering: “Three more songs, asshole, and then I’m gonna kill you.”

"We're out there singing Best of My Love, but inside both of us are thinking, 'As soon as this is over, I'm going to kill him.' Frey said.

Some believe the bad blood went all the way back to the recording of Hotel California.

In any case, fans got a live album and that was it. There were some solo hits by various members of the band throughout the 80's, and their songs were classic rock staples. But it all ended on the evening known as Long Night At Wrong Beach