The Birth of New Order 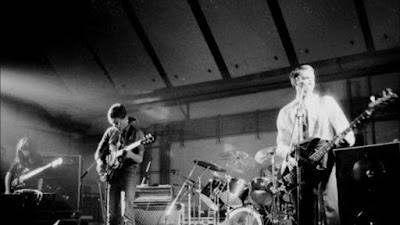 On July 29, 1980, at the tiny Beach Club in Manchester, a band billed as the No Names performed a set of instrumental music. Word quickly spread that these were the surviving members of Joy Division.

No one could agree as to whether the material was modified instrumental versions of familiar material or new compositions in the established vein, but we were all agreed that the intensity and novelty of the performance conspired to produce an overall effect rarely equalled. If the band can maintain this level then their future is assured, whatever their name, and without the needing either to play greatest hits or even to recruit a vocalist, whether a pale imitation of Ian Curtis or someone with a distinctive style of their own.

Here are some demos which I believe were recorded in September of 1980. Drummer Stephen Morris believes the songs they played at the Beach Club show included "Dreams Never End", "Ceremony", "Truth" and "In A Lonely Place".

...We wanted to continue as a band, to carry on making and playing music. From a purely practical point of view, we did have the core of a band so it seemed right to carry on. There was, of course, the problem of who was going to sing the songs. That wouldn't be resolved for a while. In fact, right up until we played our first gig as a three-piece, all three of us were singing two or three songs each, but we got there in the end.