Dexys Midnight Runners make their debut a memorable one 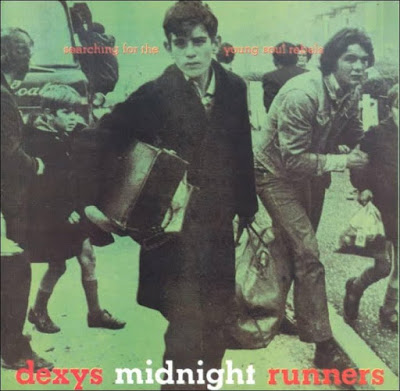 Dexys Midnight Runners : Tell Me When My Light Turns Green

In July of 1980 Dexys Midnight Runners released Searching For the Young Soul Rebels, their UK#6 debut album. Dressed like New York City dockworkers and putting on shows so full of energy you'd figure dexedrine might be playing a role, the Birmingham band had already topped the UK charts with the single "Geno", a tribute to Geno Washington whose 1960's era Ram Jam Band inspired the Midnight Runners sound. We are still nearly three full years away from "Come On Eileen" replacing Michael Jackson's "Billie Jean" at  #1 in the US.

While frontman Kevin Rowland got most of the attention, the true joy of this album comes from the three guys making up the brass section: Big Jim Paterson on trombone, Steve Spooner on alto sax and Geoff Blythe on sax and horn arrangements.  My favorite track is "Tell Me When My Light Turns Green". Every American high school and college band should be playing this at half time.  Instead we get "Seven Nations Army" by the White Stripes.

The trio were so good they get their moment to shine on the instrumental "The Teams That Meet in Caffs". The band often met in greasy spoon cafes to savor their coffees and teas and make plans to change the world. Rowland himself was dead serious about the band, telling NME "We're totally disillusioned with the press. If we're not represented properly this time, it'll be the last one." I guess he didn't like the article because Rowland didn't do any interviews for two years.

FAST FORWARD :During the Summer of 2020 members of Dexy's reunited virtually for one of Tim Burgess's Twitter Listening Parties. As fans listened to the album in its entirety, band members offered insight. Of the smash hit "Geno" Rowland said "It's hard to comment...except that my vocal sounds a bit too shrill. The playing is amazing!"

Bass player Pete Williams added "Sometimes when we played, the sheer focus, intensity, whatever, turned into a kind of transcendence, the band became an engine, beyond our control almost, I’ll never forget that feeling."

Searching for the Young Soul Rebels was number 10 in the NME  writers' end -of-year chart for 1980. The album is among the subjects of the book 1001 Albums You Must Hear Before You Die and ranks #16 on NME's list of the 100 Greatest British Albums Ever 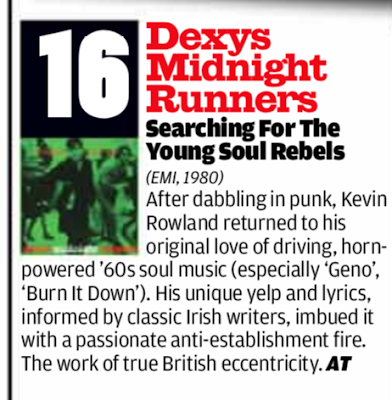 But it took time for some critics to take the album to heart. Robert Christgau never did, grading the album a B and writing:

Perhaps it will clear something up to specify that this is not a soul record. It is a weird record. Never have soul horns sounded remotely as sour, and Kevin Rowland can't carry a tune to the next note. There are horn interjections that make me laugh out loud at their perfectly timed wrong rightness, and with Kevin Rowland quavering through his deeply felt poesy and everybody else blaring away, I enjoy it in much the same way I enjoy a no-wave band on a good night--DNA, say. But DNA I understand.

And aside from "Geno" and the current single "There There  My Dear", David Hepworth was not impressed. 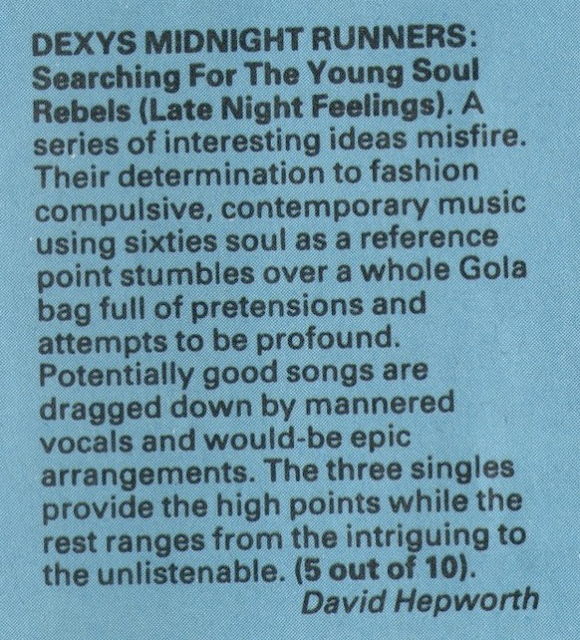 I've always appreciated rock's chameleons. The easiest thing to do is find a big selling sound and keep at it. Dexy's Midnight Runners did the opposite. They were ambitious, possibly to a fault, but always entertaining.

P.S.
When the band cut off press interviews they made their statements in advertisements. Here they are asking fans to quiet down: "We've been quickly disillusioned by ecstatic audiences...we are far from flattered by people dressing up like us". 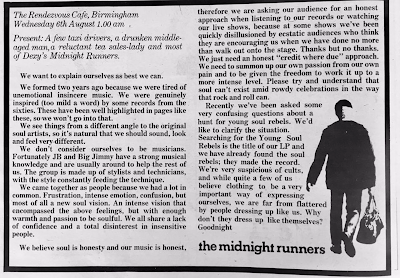