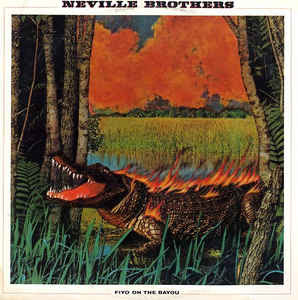 Neville Brothers : Run Joe
In April of 1981 The Neville Brothers released Fiyo On The Bayou, my favorite of their albums and a necessary addition to any serious record collection. The Brothers benefited from the participation of guitarist Leo Nocentelli ( who had played with both Art and Cyril in The Meters) and their embracing of New Orleans. They play both Crescent City classics "Hey Pocky Way" and "Brother John/Iko Iko". The album also takes advantage of Aaron Neville's angelic voice, covering "The Ten Commandments of Love" and "Mona Lisa". Yeah, this album is all over the place.
Scarcely a day went by on my college radio station when someone didn't play a track from Fiyo On The Bayou. I can't hear it without tasting the ghosts of flat keg beer in my mouth. At Tulane, we were lucky. The Neville Brothers often played Fridays on the quad.
I liked playing deep cuts on my show so I played "Run Joe", an updated version of the 1947 Louis Jordan calypso hit. Moe and Joe don't tell fortunes in the store. They sell cocaine.
Unfortunately our radio station was one of the few playing the album, which Keith Richards called  the best of 1981. “I knew it wasn’t going to get played on the radio,” Cyril Neville told Rolling Stone. “So I didn’t build up any false hopes. We just made the best record we could.”
at 3:21 PM