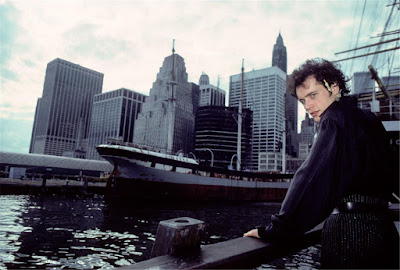 Adam and the Ants : Stand and Deliver
Adam and the Ants had posted six singles in the UK Top 40,  Now, as Kings of the Wild Frontier hit the US Top 20 in album sales, the Ant Invasion came to the United States with a 16-date tour. College radio has already added the album to playlists but commercial FM stations were, as usual, hesitant to try something new. As one music director put it, "'Antmusic' is getting good telephone reaction but it scares some people."
This same month, Adam and The Ants would release "Stand And Deliver", the band's first UK#1 hit.
A full page Billboard Magazine ad attempted to sell the Ants to the American music industry and, in fact, the band performed on American Bandstand. 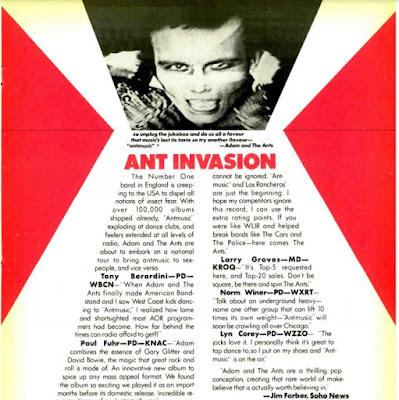 Dick Clark gave the band a warm welcome.
When the Ants showed up at Tower Records, hundred of fans showed up. Some dressed like their idols. But some punk rockers also showed up to paper the area with stickers reading "Black Flag kills Ants on Contact". Greg Ginn of Black Flag denied having anything to do with the stickers but said " There are definite philosophical differences between Black Flag and Adam Ant...They're really  just a lame joke and represent all the things punk rock set out to get rid of."
That night Adam and the Ants performed at the Roxy. Elton John, Rod Stewart and David Lee Roth were in the audience. Kings of the Wild Frontier peaked at US#44 , selling enough product to be awarded a gold record. The advent of music television would only make the visual band more popular.
at 12:30 AM