Grace Jones releases NME's Album of the Year with Nightclubbing 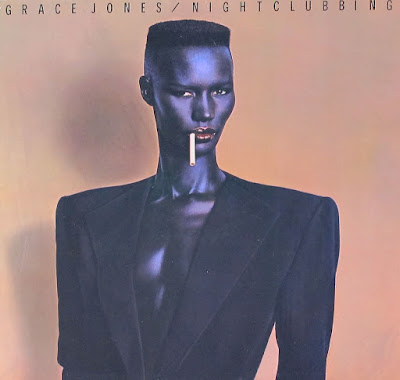 Grace Jones : Pull Up To The Bumper
On May 11, 1981 Grace Jones released Nightclubbing, voted Album of the Year by England's New Musical Express. Produced by Sly Dunbar and Robbie Shakespeare, the music pulsates around Jones' near monotone vocals. Nothing before Grace Jones ever suggested this would work. So much music that followed her example proved it did, from Beck to Bjork, from Massive Attack to even Madonna.
Nightclubbing included Jones's covers of songs by Flash and the Pan ("Walking in the Rain"), Bill Withers ("Use Me"), Iggy Pop/David Bowie ("Nightclubbing") and Ástor Piazzolla ("I've Seen That Face Before"). Three songs were co-written by Jones: "Feel Up", "Art Groupie" and "Pull Up to the Bumper". Sting wrote "Demolition Man"; he later recorded it with The Police on the album Ghost in the Machine. "I've Done It Again" was written by Marianne Faithfull. 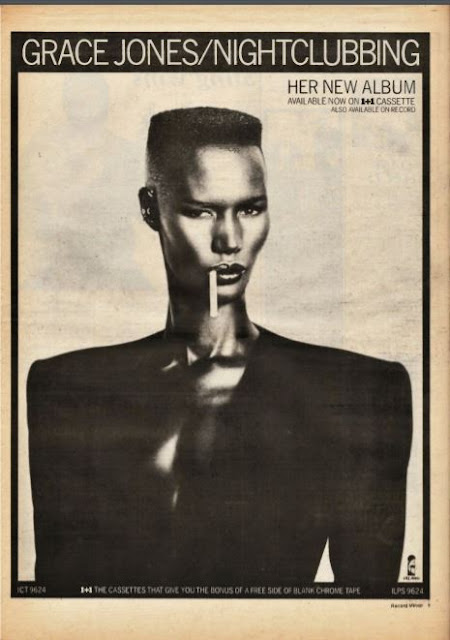 Upon the album's release, the critics were all on board.In the UK Adrian Thrills of NME said, "I spent an otherwise-miserable weekend afternoon with the sound of Grace swirling around my little earphones, grooving on songs effortlessly sung but put together with a jeweller's eye for detail", and stated that the musicians "combine to etch out a shifting, soulful surface, an exotic ice-water backdrop for Grace's vocal veneer", noting that "the only times Grace seems ill-at-ease are as she swops Trenchtown patois with, presumably, the sharp-lipped Sly and then tries to rock out on Sting's 'Demolition Man'". Roz Reines of Melody Maker called it "an album with something for everyone: reggae, electronics, disco, blues – even a snatch of salsa funk. The incredible thing is that it all gels together so well – the common denominator is the danceability, which lasts all the way through: changes in tempo and pace only help to sustain the energy level." Deanne Pearson of Smash Hits said that Jones' voice has "neither range nor power", but "the arrangements and production almost make up for this." Record Mirror critic Simon Ludgate found that Jones transcends her vocal limitations through "her character and sense of the surreal" 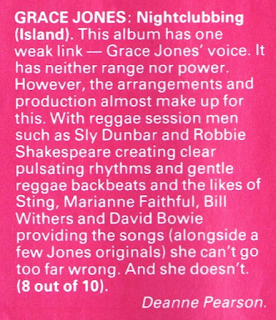 Labels: 1981, Grace Jones, Nightclubbing, Pull Up To The Bumper