Kraftwerk releases a tribute to PC's with Computer World 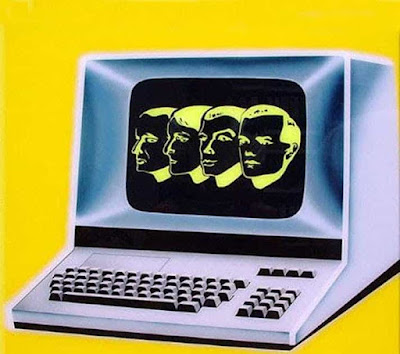 Kraftwerk : Computer World
On May 10,1981 Kraftwerk releases Computer World, their first album since 1978's Man Machine. By now the rest of the world had caught up with Kraftwerk's innovations. You can hear their influences in everything from electro to synth pop. Even the new Romantics revealed Kraftwerk's influences, even if they were filtered through Bowie and Eno's German experiments.
Kraftwerk's Ralf Hutter told the NME:
I see us as the musical Bauhaus. In their time, they could work in theater, architecture, photography and short films but they did not really have the technology to apply their ideas to music. We  now have it. We see ourselves as studio technicians or musical workers, not as musical artists"
Robert Christgau gave the album a grade of B writing
I once convinced myself to enjoy this band--if there had to be synthesizer rock, I thought, better it should be candidly dinky. And this is their funniest to date--every time I hear that machine intone "I program my home computer/Bring myself into the future," I want to make a tape for all those zealots who claim a word processor will change my life. But fun plus dinky doesn't make funky no matter who's dancing to what program. Funk has blood in it.
The album finished #2 in the NME's year end poll, behind another album released the same week.
at 12:30 AM