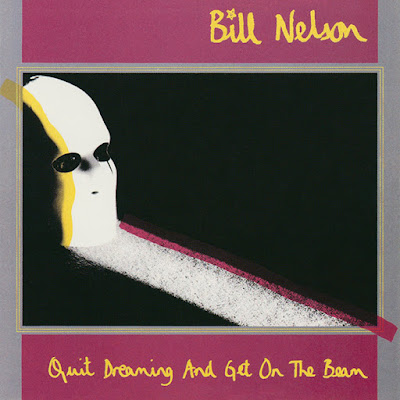 Bill Nelson : Banal
In May of 1981, former Be Bop Deluxe frontman Bill Nelson released Quit Dreaming and Get On The Beam, an album recorded back in 1979."I was still with EMI Records when Quit Dreaming and Get on the Beam was recorded, Nelson says on his website. " It was always intended that the album would be released under the Red Noise banner."
But by the time the American label agreed to release this second Red Noise album, Nelson had already tired of the name and went back to using his own. Despite the new single, "Banal" underperforming , the album sold well enough to achieve a top 10 placing on the UK album chart, entering the chart at No.7, a career peak for Nelson.
Not bad for an album made up of studio experimentations.
Nelson only has the happiest memories of recording the album:
"The Quit Dreaming and Get on the Beam album was recorded using the [Stones mobile] truck...but, this time, no band was involved. It was just John Leckie and myself in the Yorkshire village of West Haddlesey where I lived at that time. We hired the village hall, (which was then a wooden hut-like structure), and parked the Stones mobile outside for several weeks. My equipment was set up in the village hall and cables for microphones were run from the truck into the hall.
"Once a week, we had to push my guitars, amps, synth and drum kit to the back of the hall to make room for the village ladies keep fit class.
"I remember John and I walking, under a starry twilight, from the village hall, down the narrow tree-lined lane back to my home, (Haddlesey House), to have dinner. John stayed with us at Haddlesey House throughout the recording. Sometimes we'd return to the village hall after dinner to overdub something or other, or maybe we'd just go for a pint in a local pub. Very happy days indeed." 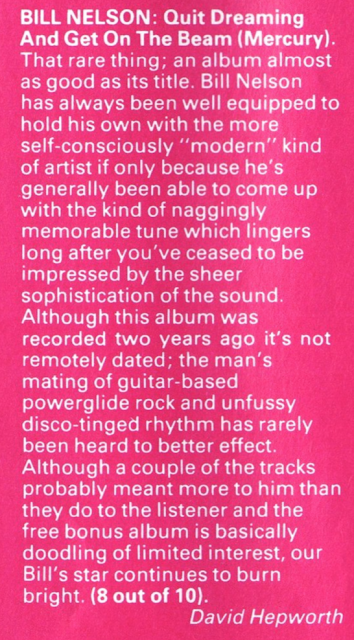 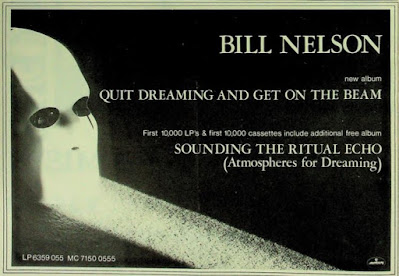 Labels: 1981, Banal, Bill Nelson, Do You Dream In Colour, Living In My Limousine, Quit Dreaming and Get on the Beam