With East Side Story Squeeze gets cursed with an epic comparison 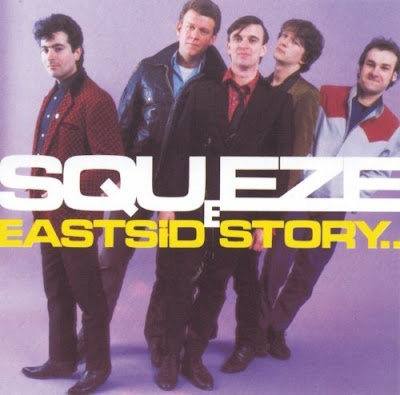 Squeeze : In Quintessence
On May 15, 1981 Squeeze released East Side Story, an album that expanded the band's sound and appeal, finally getting the band airplay on commercial radio stations in America. The album begins with a classic Squeeze song, "In Quintessence". Produced by Dave Edmunds, the single, says Glen Tilbrook, is about a bloke who "is now a very responsible teacher working just outside Liverpool. I saw him a couple of months ago and he said how perfectly this described his life at the time. Chris (Difford) was spot on in analysing him as someone who liked smoking joints and shagging birds, but what's wrong with that?" Amazing guitar solo from Glen.
East Side Story is the follow-up to Argybargy. To replace the departed Jools Holland, Squeeze hired Paul Carrack of Ace's "How Long" fame. The band had now added a touch of blue eyed soul to their repertoire, as well as the song  "How Long", which they would play in concert. 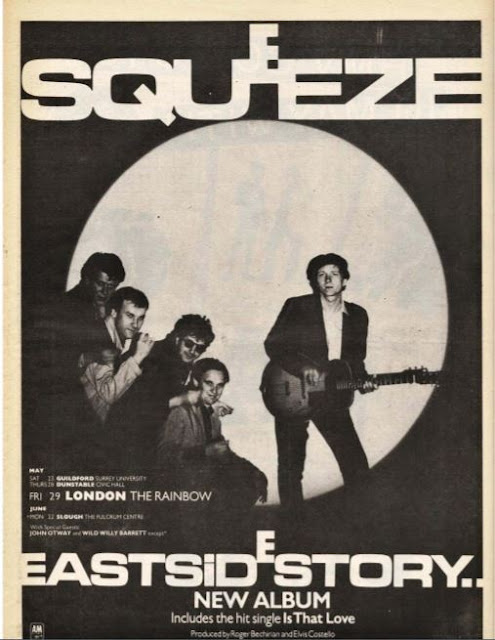 In the UK, the Beatlesque "Is That Love" was the first single, a UK#35 hit, previously discussed here.

In America, "Tempted" was the first single. It peaked at US#49 but has become the band's best known song as well as a favorite of both Difford and Tilbrook. 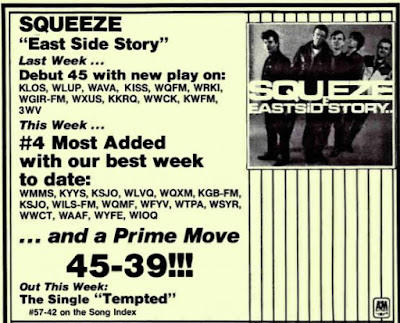 Producer Elvis Costello was the one who suggested Paul Carrack sing lead, and helped come up with arrangements based on The Temptations hits of the 60's.
The critics were elated with East Side Story. Rolling Stone famously wrote “In songwriters Glen Tilbrook and Chris Difford, the British New Wave has finally found its own John Lennon and Paul McCartney.”
“I was just confused,” said Difford in 2019, “because these Lennon/McCartney people had loads of money in the bank and we didn’t have any of those kinds of things, so I couldn’t see the comparison!” 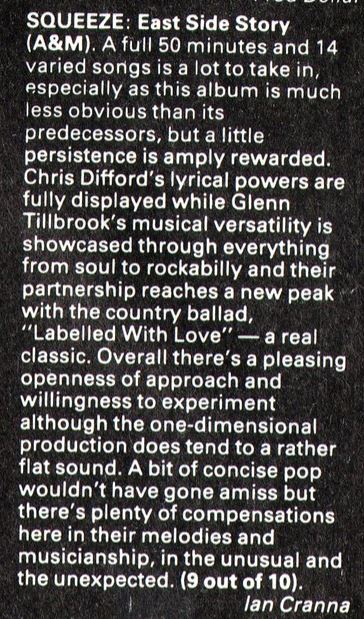 This Smash Hits review mentions the album's surprising country song which, as a single, peaked at UK#4.
Argybargy will always be my favorite Squeeze album, but this is my second favorite. I appreciate the band's desire to experiment. They deserved to. I didn't really care for "Labelled With Love", "Vanity Fair" or "There's No Tomorrow", but I have 11 other songs I can play with gusto. 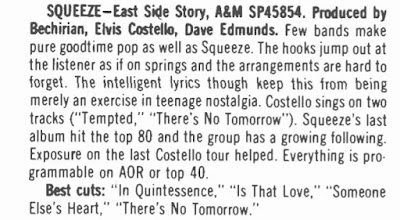 East Side Story ranked #6 on the Village Voice critic's poll, #19 in the NME poll and #4 on Melody Maker's year end poll.
Robert Christgau gave the album a grade of B+ writing:
They're finally beginning to show the consistency that's the only excuse for obsessive popcraft. The songs are imaginative, compassionate, and of course hooky--the warped organ on "Heaven" bespeaks divine intervention. And with Elvis Costello coproducing, the music is quite punchy, though I wouldn't go so far as to say it rocks.
The band's success and the Lennon/McCartney comparisons would put a lot of pressure on the songwriters when it came to following up the album. Aside from "Black Coffee In Bed", Sweets From a Stranger was a disappointment. The band soon fell apart. 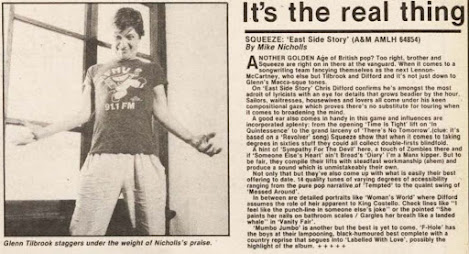