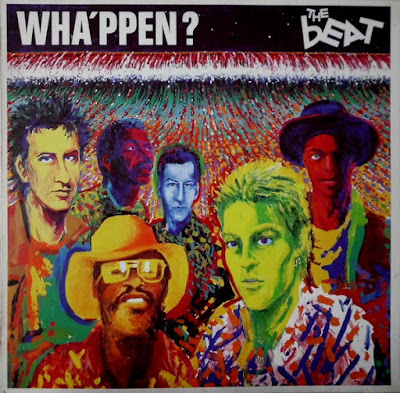 The English Beat : Doors of Your Heart
In May of 1981 The English Beat followed up their exhilarating debut with Wha'ppen, significantly slowing down the songs, making them more atmospheric and at times more political.
"I hate lies," Dave Wakeling told Record Mirror. "Most of all, institutional lies. If they didn't fill up the news with the Ripper and Prince Charles perhaps they'd have to admit that yes, well, there are actually four million unemployed people in the country. As things get tougher the government are forced to show their cards, to get more obvious in showing that they are the capitalist, racist, sexist types that you always suspected they were"
Saxa, the 51 year old saxophone player, continues to play a big role in The Beat.
"Saxa's the most articulate musician in the band by far," says Wakeling. "When he's playing his solo, he's not aware of the instrument being there at all., he's just telling you how he feels at that particular moment, about that particular song. He teaches you what the song is about". 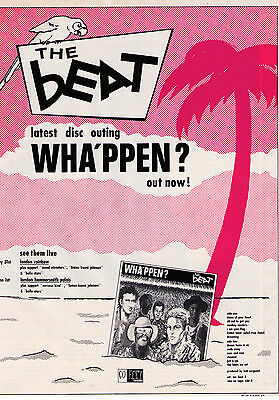 Released on May 8, in one of the great all time months for album releases, Wha'ppen peaked at UK#3 and US#126. The singles were the UK#22  double A side "Drowining/ All Out To Get You" and  "Hit It ( Auto Erotic)". The album finished No 4 in the NME critics poll, No 5 in Robert Christgau's year end list and No 23 in the Village Voice Pazz and Jop critics poll.
Rock critic dean Robert Christgau gave the album a grade of A writing:
David Wakeling shows more character (and timbre) than Terry Hall, Ranking Roger could rub his dub in a pedigreed reggae band, and the rhythms aren't solely riddims. So as two-tone grays out, the Beat follow their chops into the world-beat sweepstakes, where snaky grooves are worth their weight in yen. The Afrobeats and studio spaces and steel drums are as seamlessly colloquial as the depression politics and depressed romances, so it would be a shame if its sinuous midtempos dismay fans of its predecessor's hectic pace. I hear not resignation or compromise but a stubborn, animated adaptability. Unity rocker: "Doors of Your Heart," in which love means eros and agape simultaneously, and Wakeling finds that dread blocks the way to both, and Roger advises him to stop his fighting, 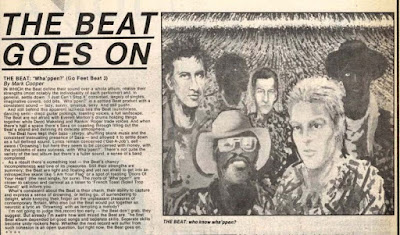 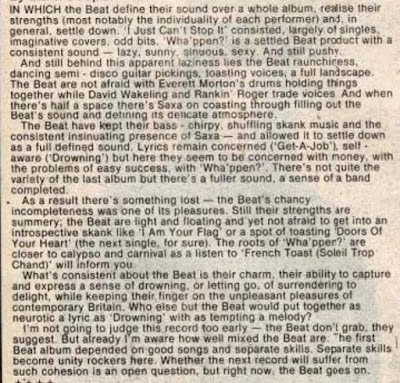 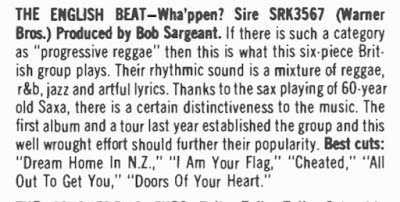 The catchy song below is about shoplifting.
at 11:46 AM