Juju is a new peak for Siouxsie And The Banshees 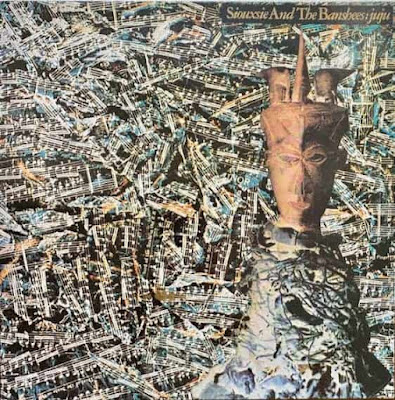 Siouxsie And The Banshees : Arabian Nights
On June 19, 1981 Siouxsie and The Banshees released Juju, one of the albums recorded with Magazine's John McGeoch on guitar. His swirling guitar sound joins Budgie's drumming and Steve Severin's bass playing to create a dark and heavy atmosphere for Siouxsie's commanding vocals. And by commanding, I mean that she commands listeners on Spellbound "When your elders forget to say their prayers, take them by the legs and thrown them down the stairs".
Met with critical acclaim, Juju peaked at UK#7 and was released in North America on PVC in October where the band toured for six weeks, selling out shows in Los Angeles. Severein told Cashbox "We're not interested in cracking America. We like success and our audience seems to be growing all the time, but we'd rather enjoy ourselves than 'slog away' like so many other bands. The desperation to make it really big brings out the worst in people. "
ROCKERILLA BEST ALBUM OF THE YEAR 1981
1. Siouxsie & the Banshees - Ju Ju
2. Joy Division - Still
3. Echo & the Bunnymen - Heaven up here
4. P.I.L. - The flowers of romance
5. New Order - Movement
6. Brian Eno & David Byrne - My life in the bush of ghosts
7. Motorhead - No sleep till' Hammersmith
8. Clock Dva - Thirst
9. Psychedelic Furs - Talk talk talk
10. Cure - Faith
11. Iron Maiden - Killers
12. John Foxx - The garden
13. Riot - Fire down under
14. Bauhaus - Mask
15. Lounge Lizards - The Lounge Lizards
16. Killing Joke - What' this for
17. Tuxedo Moon - Desire
18. Exploited - Punk's not dead
19. Rip Rig & Panic - God
20. Tygers Of Pan Tang - Spellbound
at 12:00 AM

Labels: 1981, Juju, Siouxsie and the Banshees