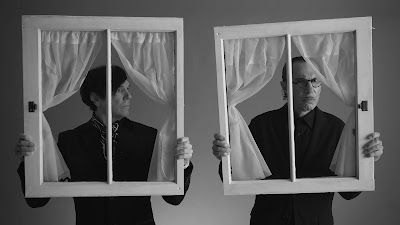 Sparks has been called your favorite band's favorite band.
“Throughout all the years that I've been making music, if you get on a tour bus with a bunch of musicians, eventually the conversation will go to Sparks,” Beck says in The Sparks Brothers, a documentary directed by Edgar Wright (Baby Driver, Shaun of the Dead).
“The reason I wanted to make this documentary is I felt that Ron and Russell and Sparks were like the greatest and most influential artists that didn't have a documentary about them,” Wright says. During the 1970s when weird music could actually top the charts, nobody had more weird hits, at least in the UK, than Sparks.
The documentary tells the story of two Southern California siblings, Ron and Russell Mael, who joined forces to make ambitious pop music. They scored nine UK chart hits in the '70s including the operatic UK#2 hit "This Town Ain't Big Enough For The Both Of Us".

Evening’s Saint Bryan is a huge fan and he wondered if Ron Mael ever came up with a melody that was so convoluted that his brother wondered if he could sing it.

“He does that all the time,” laughs Russell Mael. “From day one they've been convoluted.”

“No option but to sing it,” adds Russell Mael.

The band's image also caught on with fans of both sexes. Long-haired and handsome Russell Mael could be mistaken for any 1970’s pin-up. His brother, on the other hand, wore a mustache that reminded people of Adolf Hitler and glowered at the audience.

Bryan asked Ron Mael what it was like seeing teenage girls rush the stage to kiss his brother.

“Oh they kissed him too as you see in the documentary,” interjected Russell Mael. “ There's one that was a super fan who's in love with Ron.”

“I don't have quantity but I have quality,” laughed Ron Mael. “The more intellectual, introspective ones are the ones that come after me so I don't feel deprived at all.”Sparks has kept reinventing its sound, scoring hits overseas to this day. The Mael brothers even have a second movie coming out this Summer. They wrote the screenplay and music for Annette, a film that will be distributed by Amazon Studios in August.

How long can the Mael brothers, both in their 70’s,  keep this up?

“I've often asked that question,” Ron Mael says. “When we saw the first record that we had ever done in 1971, that was enough. We said we made it. That's all we need. We don't have a plan, so this could go on for quite a bit longer and Edgar has already signed on to do the sequel to this documentary so we're set."

The Sparks Brothers can now be seen in local theaters.