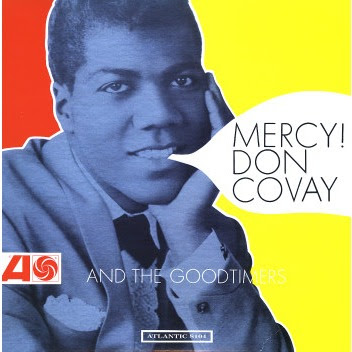 Don Covay was the original "double threat". Not only could he sing, he could drive. Covay played chauffeur for Little Richard and sometimes opened for his idol. In return Little Richard produced Covay's debut single "Bip Bip Bip"  which sank like a stone in 1957
Fast forward to 1964 and Covay, finding success as a songwriter for Jerry Butler, Gladys Knight & the Pips and Wilson Pickett gets a young Jimi Hendrix to play guitar on a new record he wrote: "Mercy, Mercy". The single, a short soulful stew of blues, groove and sweat would hit #35 on the Billboard charts.
The Rolling Stones recorded a better known cover version on Out of Our Heads. It's interesting to hear the two versions side by side. If Mick Jagger hasn't transformed himself into Covay,  he sure as hell seemed to be trying his best to make it happen.
Covay also wrote the #44 pop hit "See Saw" and "Chain of Fools" both covered by Aretha Franklin. In 1969, Covay and the Jefferson Lemon Blues Band recorded a brilliant blues-rock album called House of Blue Light. For more on that amazing album, check out this excellent review on The Rising Storm . Despite a debilitating stroke, Don Covay, mercifully,  is still with us.