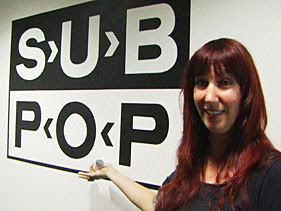 "Lamestain"
"Cob-nobbler"
"Swinging on the Flippity Flop"
Back in the glory days of grunge, these were just a few of the slang phrases people were slinging around Seattle.
At least according to The New York Times in a now infamous article.
In fact, a then 25 year old hyper-caffeinated record rep named Megan Jasper--in a fit of inspiration-- made up the phrases on the spot.
And the reporter asking for the grunge lexicon?
He bought it!

Megan:
I actually thought the call was a prank at first because it seemed so silly and when I realized it wasn't, I sat there and thought "Oh this will be fun" and I wrote a bunch of words that sounded funny or goofy

So there was Cobnobbler the grunge word for an uncool person.
Tom Tom Club--an outsider. Someone not from Seattle.
Bound and Hagged --someone who stays home on party nights.


These are words also some of us --I mean a couple of us--would use kind of as a joke but I mean that was it. A joke. So we would say lamestain. Or cobnobbler.

Yes That's a big fat loser.
With each word that was being translated it got goofier and goofier and I thought the phone call would end with him saying "Oh come on!" you know?

But that never happened. Even when she defined:

Swinging on the Flippity Flop --means "hanging out".


He was concentrating so hard on just getting everything accurately that all I could hear was the typing.

I think my mom called up and said " You're in da New Yawk Times" ( laugh)
I was like "What?" so I ran down and got a copy.I could not stop laughing.I was shocked that that made it into the most prestigious newspaper.

Word of the grunge hoax spread quickly through the Seattle music scene. 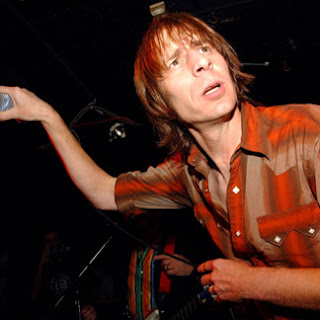 Mudhoney's Mark Arm:
One thing that Mudhoney did after that is we made a concerted effort over the new year or so to use those terms as much as possible ( laugh) to kind of keep the thing going.

Today Megan is vice president of Seattle's Sub Pop Records. She's helping people discover the new sounds of Seattle. But the grunge hoax may very well be what she goes down in history for.