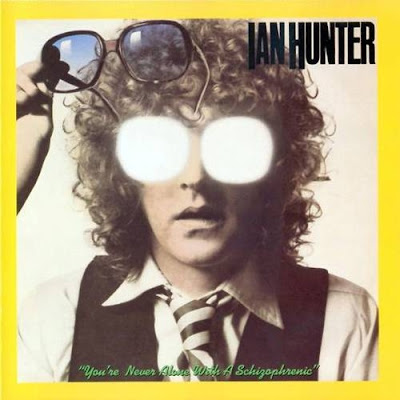 In March of 1979, Ian Hunter released You're Never Alone With a Schizophrenic. Reunited with his Mott the Hoople guitarist Mick Ronson, who also took on some producing roles, Hunter rocks through the set list with members of the E Street Band including organist Roy Bittan, bassist Gary Tallent and drummer Max Weinberg.

The first single from the album was "Just Another Night", a straight forward rocker that peaked in the United States at #68.

Best known in the States is "Cleveland Rocks", which became the theme song of The Drew Carey Show as play by The Presidents of the United States. Hunter told SongwriterUniverse.com  he wrote the song because someone needed to stand up for Cleveland:

What it was, when we first came [to the U.S.], you had those talk shows like Merv Griffin and Johnny Carson, and I noticed that they’re always taking the mickey out (making fun) of Cleveland. If there was a town to be taking the mickey out of, it was Cleveland. And I’m like, “That’s not right. Because we didn’t get discovered in L.A., we didn’t get discovered in New York. We got discovered in Cleveland, as did a lot of people.” The same with (David) Bowie…Cleveland was way ahead. You’d play Cleveland and [the venue] would be full. Everywhere else, it would be like 150 people staring at you, saying “What is that?” And so that’s why I wrote “Cleveland Rocks.”

The album is schizophrenic, settling into ballad mode for "Ships", a song about fathers and sons and the distances they must overcome. Strangely, Hunter's labelmate , Barry Manilow,  covered the song and hit the U.S Top 10 with it later in the year. Hunter told 3 Songs Bonn how it happened:

It was confusing. What it was, was that Clive Davis who is head of Arista now. He was head of Columbia Records in those days. If Clive liked a song, when his big artists came in he would put it on in the background during a meeting and the idea was that the artist would pick up on the song. That’s what happened with ‘Ships’. Manilowe’s father had just died. Clive’s sitting there talking to him and Manilow starts getting into ‘Ships’ and that’s how that happened.

Robert Christgau gave the album a grade of B writing

Six winners out of nine on this mini-comeback, and he doesn't seem to be straining, either. But that's not entirely a blessing--the musical territory is conventionally good-rockin', and only on the gnomic "Life After Death" and the second verse of "When the Morning Comes" does he reconnoiter lyrically. The titles of the bad songs--"Bastard," "The Outsider," and "Ships" (in the guess what)--are warning enough
at 2:00 AM