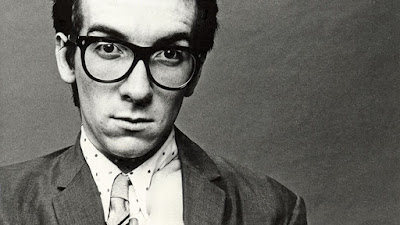 Elvis Costello and the Attractions: I Stand Accused

On March 24, 1979 Elvis Costello opened his Rochester, NY concert with "I Stand Accused". By that time, news of his ugly encounter at a Holiday Inn bar with Stephen Stills and Bonnie Bramlett had spread like wildfire. In his book Complicated Shadows : The Life and Music of Elvis Costello author Graeme Thomson gets Attractions bassist Bruce Thomas to admit they started the altercation as the alcohol flowed.

“Stills said, “If you hate us so much, what are you doing in our country?”,’ recalls Thomas. ‘And Elvis said something like, “We’ve come to take your money and your women.” Then it just got worse. “What about our music?” “You haven’t got any good music.” “What about James Brown?” “James Brown?” Bang! That’s pretty much how that one started. It was just us being obnoxious bastards.’
In this instance, being obnoxious bastards culminated in Elvis describing James Brown as ‘a jive-ass nigger’ and Ray Charles as ‘nothing but a blind, ignorant nigger’.

The timing couldn't have been worse. The new album, Armed Forces, has just hit the Billboard Top 10 in America. On March 30, CBS Records called an emergency press conference to get Costello --now followed around by two armed policemen as bodyguards--to apologize and answer questions about whether he was a racist. Behind the scenes, record execs discussed dropping Costello from the label. They certainly stopped promoting the album. By the end of April, Armed Forces has dropped out of the Top 30 and the new single, "Accidents Will Happen", didn't even break into the Hot 100. 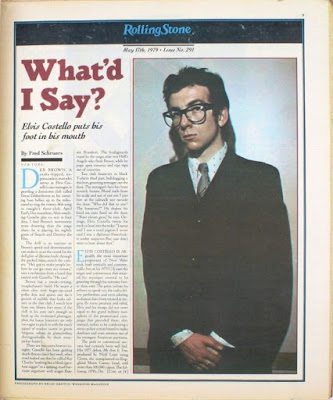 In his book Unfaithful Music + Disappearing Ink Costello writes of the incident:

I’ll have to take the word of witnesses that I really used such despicable racial slurs in the same sentence as the names of two of the greatest musicians who ever lived, but whatever I did, I did it to provoke a bar fight and finally put the lights out.
It was an absurd overstatement of opposites, a contradiction in terms.
Just as people say “bad” when they mean “good.”
Surely this was all understood. Didn’t they know the love I had for James Brown and Ray Charles, whose recording of “The Danger Zone” I preferred to watching men walk on the moon?
“My love for the world is, like, always.”
How could you not know that?
It seems that they did not. It took just five minutes to detach my tongue from my mind and my life from the rail it was on.

It's always interesting to see how people react to sudden fame, especially when they're expected to live up to some nasty misanthropic image. Costello may have deep regrets about the incident, but he also believes it might have saved his life. Like Dylan with his motorcycle accident, Costello would need to take a breather before he started trying to win back his fans.