The Angels Are Sheep 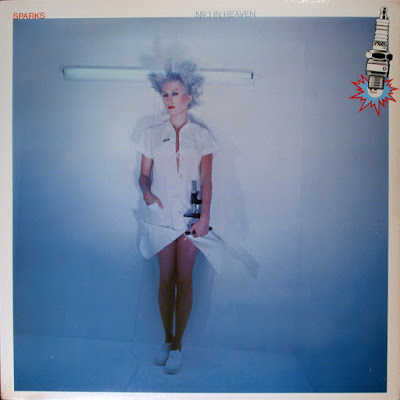 Sparks : No 1 Song in Heaven

In March of 1979 Sparks released No 1 Song in Heaven, the result of a dynamic collaboration with the Italian electronic dance producer Giorgio Moroder. Gone were the guitars, bass and piano. Enter sequencers and synthesizers. Layers upon layers of them surrounding  Moroder's preferred percussion and drum player Keith Forsey. The title track may have only peaked at U.K. #14, but it's one of Sparks' catchiest ear worms. It even inspired the sound of Joy Division's "Love Will Tear Us Apart".

Here's where Sparks should get their due. Almost every act that tried their hand at disco embarrassed themselves. Some lost fans for good, and all for a fad that would fade away by year's end. These bands let disco define their songs. Sparks and Moroder redefined disco and came up with a sound that would define 80's dance music.

And they recorded a song from the perspective of human sperm.


Robert Christgau gave the album a B+ wriitng:

Anglophilia's favorite androids were destined from day of manufacture to meet up with some rock technocrat or other, so thank Ford it was Giorgio Moroder, the most playful of the breed. They even got a minor dance hit out of it--"Beat the Clock," a good one--but that's not the point. The point is channeling all their evil genius--well, evil talent, then--into magic tricks. Like the ultimate voice-box song. Or the title tune, which sounds like "Baba O'Riley" and then breaks down into Eno (or is that Gentle Giant?). Fun fun fun.

Labels: 1979, Beat the Clock, Giorgio Moroder, No 1 Song in Heaven, Sparks, Tryouts for the Human Race